CONVERSATION WITH THE CHEF: The Adventures of Tubby Robot 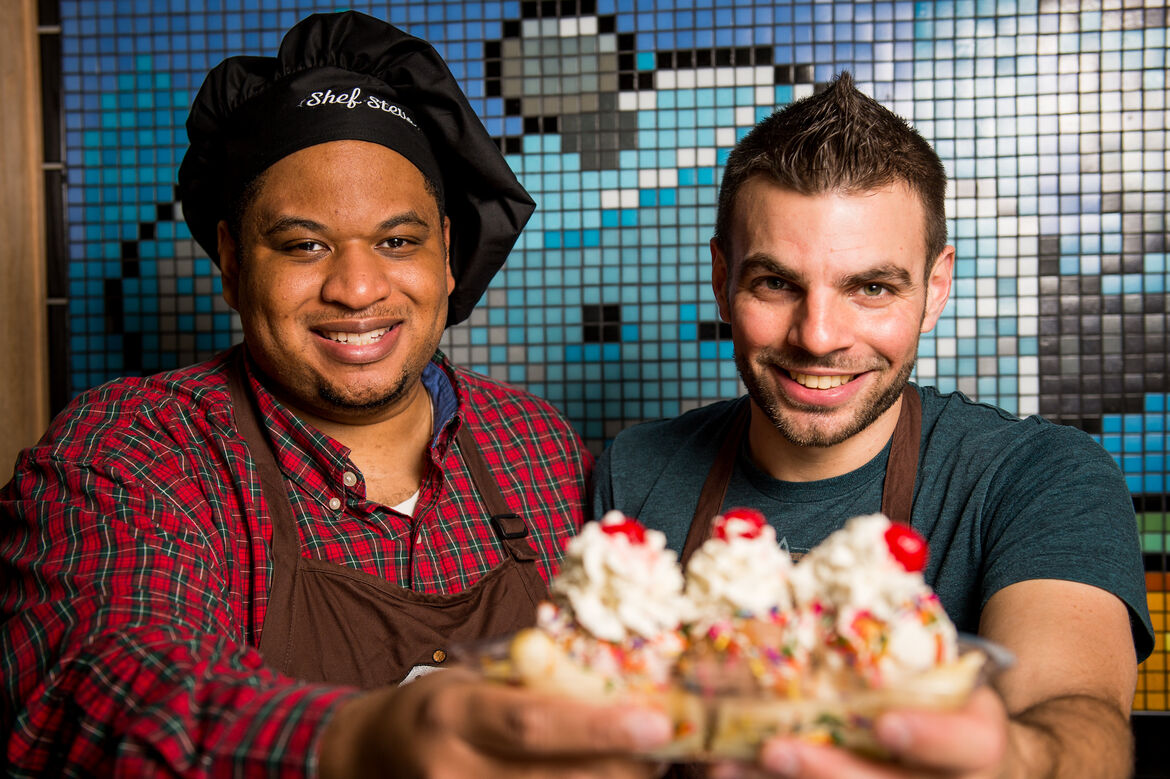 Ever since they met in sixth grade at Julia R. Masterman School, Chris Maguire and Steve Wright Jr. have shared an unwavering enthusiasm for ice cream and video games. On March 19, that enthusiasm materialized into their very own storefront.

Tubby Robot Ice Cream Factory delights its patrons with homemade ice cream and a side of nostalgic video games. For both Chris and Steve, creating a shop focused around “two of the greatest things in life” comes as a complete turnaround from their previous careers.

After graduating from New York University with a custom degree in Art, Computer Science and Animation, Chris became a web developer who co-founded a handful of startups. Oddly enough, Chris originally designed the “Tubby Robot” mascot during this time as a 404 Error graphic on his websites. But the further he ventured into his career, the more Chris felt disenchanted with his non-stop work life. The inability to look people in the eye while continuously staring into a computer screen disconnected him from the real world. It didn’t take long for Chris to devise his next step.

“At this point, I had saved up a bunch of money from web development and I was between jobs,” Chris said. “I asked myself ‘What do I do next?’ and I was like, ‘Think, Chris! If there’s anything you could do in life...money is not an object. Time and space is not an object. What would it be?’ And the obvious answer was an ice cream parlor that has arcade games — the two best things in life combined.”

While Chris specialized in the tech industry, Steve worked as a legal assistant for the Department of Public Welfare. He, too, was beginning to feel overwhelmed by the day-to-day stress of his career.

“I was dealing with people’s livelihoods,” Steve said. “It was an important position, but at the same time it was soul crushing because we dealt with the worst situations. A lot of them were child abuse cases, which is like the opposite of selling ice cream. When it came to the point where Chris was serious about opening an ice cream shop, I immediately jumped on board.”

Neither business partner had a professional background in the industry, but they did eat enough ice cream in their lifetimes to recognize what impeccable ice cream looks and tastes like. Before the idea of a brick and mortar shop even came to mind, Chris attempted to master some basic flavors at home with an ice cream maker he and his wife received as a wedding gift. It took him roughly a year of iteration to finally get his recipes down to a science, but these core flavors paved the way for Chris and Steve to get experimental. Today, they churn roughly 60-80 gallons of ice cream in-house every week and offer 16 flavors at any given time.

There are always new, creative flavors in the rotation and many more they haven’t even introduced yet. Some of their bestsellers include Peanut Butter Fudge Swirl, Chocolate Mint Chocolate, and Lavender Honey, which was custom designed for North Light Community Center’s Spring Gala. But the pièce de résistance on Tubby Robot’s menu is their selection of specialty sundaes, like Chris’ personal favorite: The Belgian Waffle Sundae.

“Sundaes are what it’s all about,” Chris said. “Ice cream is great, but I think ice cream is best when you pair it with different temperatures and textures. There’s nothing better than combining the hot with the cold or having that bite change midway through.”

What’s even more impressive than Tubby Robot’s frozen treats is the space itself. When Chris initially acquired the property, 4369 Main Street was nothing more than a dilapidated building between two restaurants. With the help of local architecture firm, Cadre Design, Chris and Steve were able to raze the original building to the ground and rebuild a brand new, state-of-the-art facility.

With just a 600-square-foot space, the Tubby Robot team needed to utilize every last available inch to their benefit. They knocked down a sidewall to make way for multi-panel sliding windows and maximize their natural light. Customers ooh and aah at the three large tile mosaics designed by Chris himself that feature the Tubby Robot mascot reenacting scenes from classic video games in local settings such as Pretzel Park, Belmont Plateau, and the Manayunk Bridge. From inception to opening, the entire process took about two and a half years to implement.

“We’ve put a lot of love and care in the design and it shows,” Steve said. “There are so many people from out of town who come in assuming we’re a chain. They’ll ask how many locations we have because they’re blown away by how professional it all looks.”

And then, of course, the cherry on top of Tubby Robot is Wall-O-Vision, Chris’ custom video game console that features all your favorite video games from days of old. A mounted computer and projector on the ceiling displays classics like Donkey Kong, Tetris, and Space Invaders onto the building next door. And it’s all controlled by wireless controllers on the shop’s countertop. What fascinates Chris and Steve the most about their clientele is how the younger generation has no idea what a joystick is or what these games are, yet they are still mesmerized by the technology.

“It’s amazing to see how the games are still compelling,” Chris said. “You might think technology has progressed so much and these kids are only into things that are so much more interactive. But you sit them down in front of Ms. Pacman or Galaga and they’re hooked! It draws them in along with their parents.”

Steve has referred to ice cream as “a great facilitator in bringing people together,” and that’s exactly what the Tubby Robot is programmed to do. They want to provide their patrons with the best ice cream in a comfortable setting that people from all walks of life can enjoy. Just like the friendship Chris and Steve have created, their hope is for customers to build similar bonds with shared experiences over ice cream and video games.

But it goes even further than that. They want to bring their customers’ ideas to life, whether it’s through a particular ice cream flavor or a sundae or a video game of the week. Manayunk welcomed Chris and Steve’s business endeavor with open arms and supported their progress every step of the way. And now, they want to return the favor through community involvement, collaboration with other businesses, and contributing to the overall narrative of the neighborhood.

“We want to be your neighborhood ice cream parlor and we want to grow with you,” Chris said. “Being the people who make the ice cream ourselves, we can really have a lot of fun together. When I say we have a new flavor every week, it’s because people come in every week and give us a suggestion. And we’re building on that. I’d love to get even more suggestions through ice cream-based conversations with everyone in Manayunk.“