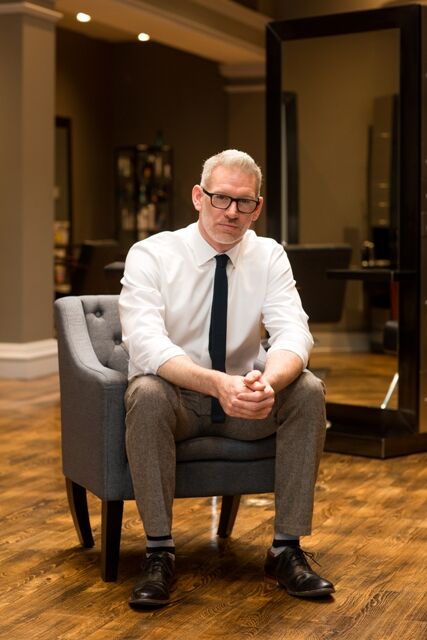 As most stories go, Michael O’Connor’s entrance into the world of hair salons was an organic one. It all began when he was a 16-year-old high school student focusing on his school work and working for a bricklayer outside of the classroom.

“One day, I just started cutting my friends’ hair in my basement,” Michael said. “Then dads started coming to get their hair cut, then my sisters started asking for more unique cuts, so I knew it was time to give it a real try.”

After a few years of practice in the basement, he enrolled at Jean Madeline Institute at the age of 23. To say he was underprepared is an understatement, but one thing is for sure — Michael was ready to learn all he could.

“All I had at home was a pair of clippers and scissors,” he laughed. “This was on a whole other level.”

After about a year and half, Michael completed the program and went on to work at some of Philadelphia and Bucks County’s top salons including Gary Charles & Associates and David J. Witchell.

He didn’t make his way to Manayunk until a few years later at the age of 25, when he was strolling along Main Street with his then girlfriend, now wife, Leah. He spotted the original Salon L’Etoile, and knew he wanted to apply for a job there just by the looks of it.

“At that point, it had been open for about nine years,” Michael said. “It was a great salon with a great footing, but I knew there was a lot of room for growth for me there.”

And he was right. After just seven months of working in the salon, Michael started overseeing the jewelry counter, and stepped into a management role shortly after.

After being in business for so many years, Michael knew the salon needed to expand outside of their beloved location.

“I knew I needed to be on street level and offer better parking options for my customers,” he said. “Working from a blank canvas is so much easier than working around pre-existing condition. You can only remodel the same space so many times.”

He originally looked for a location to purchase, but when Michael came across the old Restoration Hardware space at 4120 Main Street, he knew he couldn’t lose out on the space even though it wasn’t on the market.

“I had my eye on places on Main Street,” he said. “But I couldn’t find anything comparable to the grandeur and layout of the Restoration Hardware space. And having a free parking lot at the building was something I couldn’t pass up.”

Michael admits there was a little skepticism surrounding the potential space among his staff, but Michael had a vision.

“I loved the old space, but it’s all about forward motion,” he said.

So, in July 2017, Michael and the team packed their bags — and their scissors, curling irons, hair dyes and all — and moved the salon a few blocks down to the new location.

“It was a crazy move,” Michael remembered. “We didn’t close the salon for a single day. We didn’t want to stop our staff from working or stop our customers from being able to get services. Plus, we had a new building with renovations to start paying off, so we had to keep things moving.”

The move was one thing, but the renovation was another project in itself. Michael admits he was more confident going into this renovation project because just three years earlier in 2014, he ventured out on his own and pursued his entrepreneurial spirit by opening his own salon in North Wales, Salon L, named after his wife Leah.

“I built that salon from the ground up,” Michael explained. “I helped general contract that job. I built the stations and the front desk for that job and used some of my past bricklaying experience to accent the pillars and front desk with brick pavers.”

“I didn’t want to mask that or strip that down,” he explained. “I wanted to work with the style of Restoration Hardware — clean, classic, a little strong, but with added feminine touches throughout.”

He even went to the Restoration Hardware outlet to purchase some pieces to accent the space, including the large chandelier at the salon’s entrance, along with wood and metal shelving units.

When it came to the layout of the space, Michael’s main focus was to keep it open. He didn’t see the main space as just a salon — he saw potential for client events, hair events and distributor product launches.

“To accommodate that, we designed the space so all of the stations can be broken down, and I can put them in the back room so the main space can be cleared out for events,” he said.

His once-doubtful staff are all growing fond of the new space, the open one-level concept, and the natural light from the two large skylights.

“We can all see each other and interact more,” he said. “It’s easier to communicate and make sure the clients are where they need to be.”

And while Salon L’s clients have grown to love the new space. According to Michael, they’re enjoying the amenities, especially the free two-hour parking.

“The biggest thing I see is that customers are just more at ease coming in now,” Michael said. “Sometimes at the old location, they would walk in flustered after trying to find parking.”

With the big move also came a choice to make a name change. Since Michael already owned Salon L in North Wales, he again chose Salon L, to give the salon a fresh start and connect it with his other location.

With a new name and a fresh new look, Salon L still offers the same great services as the prior salon, including women’s and men’s haircuts and coloring. They also specialize in microblading and balayage, a low maintenance and cost-conscious coloring process.

“The hair trends now are so different than when I first started,” Michael said. “The trend then was to be extremely blond and extremely straight — to the point where your hair was just damaged. Now, we recommend people embrace their natural texture and don’t force changes or you will ruin the integrity of your hair.”

With more space to work, Salon L expanded their services to feature a beauty shop in the front of the salon. Clients can stop by to shop top beauty lines like Bare Minerals makeup, Oribe luxury hair products, or get waxing services.

But, there’s still a section of the large space that has yet to be filled...until now. The front left half of the space, which has direct access from Main Street, will soon be home to Pilgrim Roasters, a brand new coffee shop who roasts their beans on site.

“Coming off being right above Volo [Coffeehouse] in the old location, we knew it was a great partnership. There’s no coffee shops at this end of Main Street, so it will bring more traction,” Michael said.

Michael knew a café was something that was important to his staff to make the new space complete, but even as is, he’s noticed the energy of his staff has changed at the new location.

“Some of them were walking into the same space for years,” Michael said. “They just have more energy now when they walk into the new location. The change of environment has definitely been a positive one.”

Team member Dana Tobin, who won Best Stylist in Best of Manayunk 2017, was actually Michael’s first assistant and has been working with him for over 14 years. In fact, Michael says over seven of his employees have been with him for more than 12 years and are now like family.

Michael has also managed to bring his own family members into the salon industry including his nephew, Ryan, who is currently the floor manager at Salon L in Manayunk, and another nephew, Matthew, who manages at the North Wales location. This former basement barber has certainly turned his once hobby into a true family affair.