TASTE THIS: Creating A Culinary Community 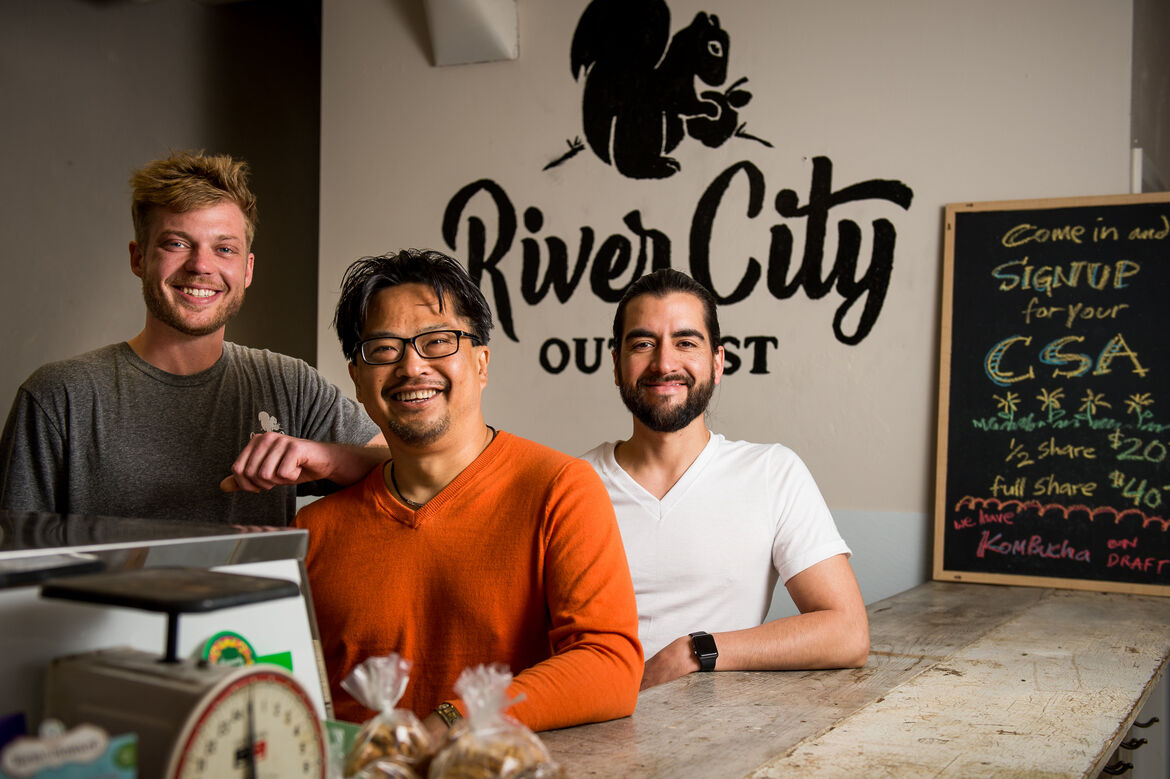 If there is one thing that everyone knows about Manayunk, it’s that the neighborhood is, essentially, a food hub. Restaurants have been bringing in visitors since the 1980’s, and slowly, more and more food businesses opened up, such as ice cream shops, burger joints, and taco stands. For Andres Maldonado, there’s always been one element to this food community that’s been missing for some time now — a marketplace.

“I wanted a place that I can walk to, get some groceries, go back home, cook them, and do the same thing the next day,” said Andres, co-owner of the newly opened River City Outpost. “Sometimes I eat greens, some days I want sweet potatoes, and some days I want guacamole. The convenience of having something fresh, available, and healthy is huge.”

Andres and his business partner, Pat Breslin, met two years ago by spending time at Volo Coffeehouse. Andres was (and still is) a barista, and Pat had been a regular there. In the spirit of living in our small community, Andres and Pat became fast friends and realized they had something in common — their love of food.

“In the summer of 2016, I found out Andres was roasting granola,” Pat said, adding the conversation eventually lead to opening their own food store. “We talked about the building while we were sitting outside at Lucky’s [Last Chance] one day, and we were like, ‘Let’s go and do this!’”

The building was 4414 Main Street, the former location of Gaily’s Crazy Cow Cafe. It had been vacant for a little over a year when Pat and Andres sought the help of other local business owners to track down the owners of the building.

“Just from both of us living here, we knew what the community of business owners was like,” Pat said. “We got a lot of help along the way. Jack Goldberg (The Eyeglass Works) Pat Feeney (Main Street Music), and Chris Barnes (Lucky’s Last Chance) were super helpful. We literally signed our lease at Lucky’s with one of the bartenders as our witness!”

Main Street’s newest business owners got to work on the building in the fall, and spent the next six months making it their own — dusting fixtures, ripping up the carpeted floors, and painting over the green and purple walls. In between sleepless nights surrounded by dust and paint, they found time to create a business plan, go through catalogs of suppliers for non-perishable items, and find suppliers for organic fruits and vegetables — but not without the help of friends Ammie Ferguson and Art Tran.

Ammie, former owner of Tapasya Hot Yoga on Cresson Street, has a macrobiotic food certification and shared her knowledge of all things food with Andres and Pat. On the other hand, Art Tran, who has recently joined the team as a partner, offered to help with things like River City Outpost’s website.

“Art has been here practically every day since we opened,” Pat said. “He’s a great chef — his heart is in it. That’s where Andres, Art and I all connect. We all love food.”

So, where did this love of food come from? For starters, Pat grew up in a Polish and Irish household where potato dishes and pound cakes were regularly on the menu. But he really found his passion for fresh produce when he bought a house with a large backyard — perfect for gardening — in Manayunk 10 years ago.

“The thing I’m fascinated by is being able to get food items and not having to over-dress it,” Pat said. “The real taste of vegetables is what I really love about food.”

Andres chimed in, “When I first started going to school, I woke up to the juice squeezer early in the morning because my mom was making orange juice. That was my alarm.”

“My brother is a chef, my mom is a closet chef, and my grandma was definitely a closet chef, too,” he added. “I grew up with people who take their time in the kitchen and love to talk about how they cook something and what it tastes like.”

Pat went on to explain how the idea of “taking your time” lead to the slow food movement. It started in the 1980’s when fast food chains mass-produced their products, which ultimately lead to a potato shortage and poor living conditions for cattle.

“It was this whole grab-and-go mentality,” Pat said. “The slow food movement is not buying into the fastest and cheapest. It’s being aware of where everything comes from. Take your time with your food — enjoy it more!”

When it came to the business model of River City Outpost, building upon the slow food movement was a must.

“What’s good is when you think about the basic principles of it — it’s good food and it’s good local food,” Pat said. “It simplifies everything down to a way where you don’t have to be scared of it.”

Taking a cue from the slow food movement, Pat, Andres, and Art have a goal of getting products as naturally and locally as they can, from produce to baked goods, and even home products, such as cleaning supplies. They get their apples from Kaufman’s Fruit Farms, their chocolate milk from Maplehofe Dairy, and their produce from Lancaster Farm Fresh, which represents a variety of small farms in the general area.

“They do a lot of the vetting with what they’re going to sell,” Pat said of Lancaster Farm Fresh. “We wanted to bring in radishes last week, and they said the radishes weren’t up to their standard, so they wouldn’t sell them to us.”

As much as they would love to only sell locally grown products, it’s a tough job for farmers in the northeast.

“Not everything grows here, but if we’re going to carry it, it absolutely positively has to be organic,” Pat said. “I think about the lemons, for example. When Walter from Palmer Distilling came down here and said he wanted to use our lemons for his gin, that’s when we realized we needed to bring them in. If we have access to it, we’re going to bring it here. We need to cater to what people want.”

This is the kind of mentality Pat, Andres, and Art had all along when they decided to open River City Outpost. It’s not for them, it’s for the community. The thought really came to light when they had a local mom come to them with the idea of a cow share program. She had already done some outreach through social media, and had several people interested. But, she wasn’t sure what the next step was.

“She said, ‘Can you guys help figure that out and do that?’” Pat said. “There are a lot of sleepless nights, but that’s why we show up every day. There are so many more of those stories out there.”

The future of River City Outpost lies within the community as Pat, Andres, and Art strive to make the marketplace a co-op. They want to prove that they are invested in the community not only physically, but truly.

“I think of every dollar that is spent here,” Pat said. “Let’s say we buy a product for one dollar and sell it for two dollars. One dollar covers our cost and the other we want to go back to the community. We joked a lot about River City being a gang. That’s the potential we could hold.”

For the more immediate future, Pat, Andres, and Art are working on having a fully functioning kitchen to create prepared foods using fresh vegetables, fruits, meats and cheeses from Pennsylvania, along with bread from Baker Street Bread. Open-face sandwiches and salads are just some of the items Andres and Art will be fixing up. The kitchen will also be utilized for off-site catering for meetings, banquets, and the like.

For now, River City Outpost will continue their weekly “Snack Sack” program, where customers can sign up for a weekly bag of whatever is available that week — from produce to anything else they have in store and want to highlight.

“It’s a program to engage the community — to try new things, to get creative with what you can make out of the sacks when you get them,” Andres said.

Also, in the near future is a partnership with Manayunk-based food truck, Zsa’s Ice Cream, who will be parked outside of the storefront from Friday nights until Sunday nights all summer long. This is just another way Pat, Andres, and Art want to make that connection to the community, all while proving Manayunk has always needed a place like River City Outpost.

“This season is all about growth, and I think the seeds we already laid down here are pretty profound. We’re excited by it,” Pat said. “Now, we’re rushing to get this kitchen open so we can start doing things we didn’t think were possible four weeks ago!”