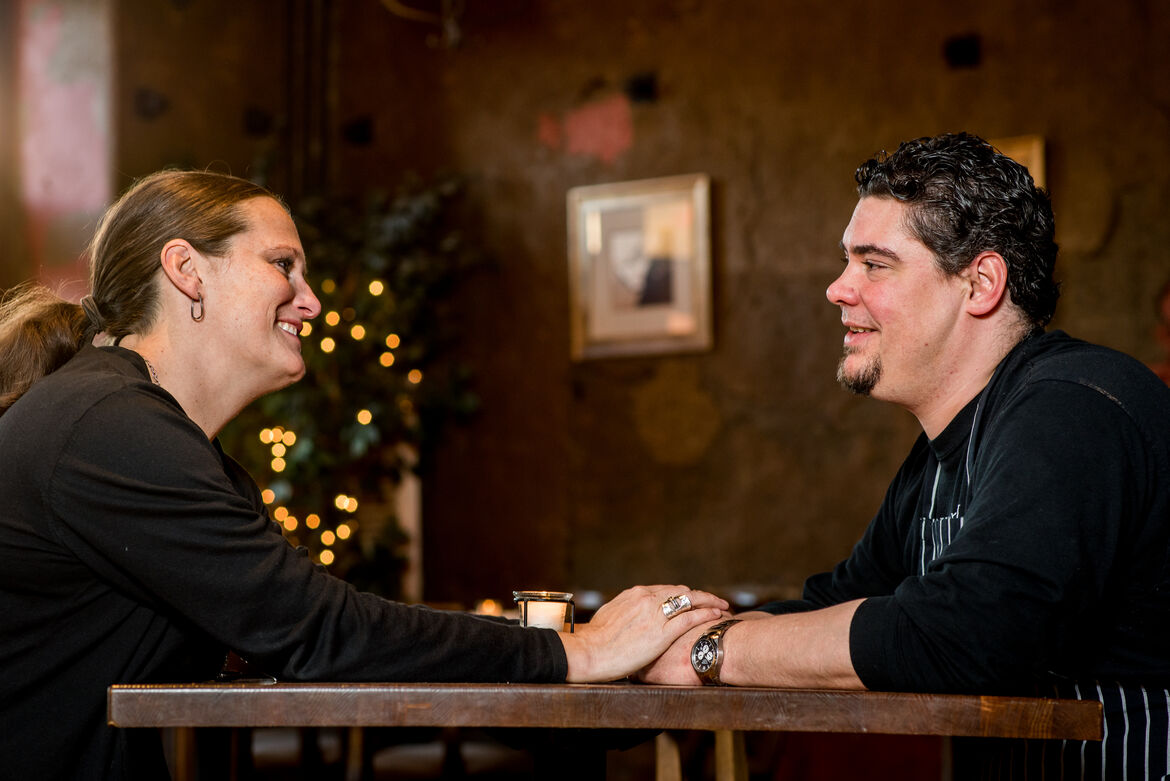 When you think of a first date, what words come to mind? “Nerve-racking.” “Anxious.” “Awkward.” Rarely would you find yourself describing your first Match.com date using words like “relaxed”’ or ‘“comfortable.” With one exception, that is: if your first date happened to be at Bourbon Blue.

"It's a comfortable meeting point, and I think that's because we have a mix of everything," said Owner and Head Chef, Brendan McGrew, of his New Orleans-inspired American restaurant. "You can come in for a happy hour, get an appetizer, or if things go well, move into the dining room."

A lot of places on Main Street are either a bar or a restaurant. Bourbon Blue is a little bit of both, with a section of cocktail tables in the bar divided off from the dining room.

"Getting a cocktail table isn't as formal as sitting down for dinner,” Brendan said. “There are still people around, so it's casual, but you're not at the bar with people leaning over you, listening to your conversation. It gives you a level of privacy to talk and get to know each other."

Bourbon Blue is ideal for those "see where the nights takes you" dates—it's elegant enough to impress, yet laid back enough to not worry if your date shows up under-dressed.

"If you walk in wearing a cocktail dress from a wedding, you're going to be as comfortable as the person wearing jeans and a tank top," Brendan said. "There isn't a dress code, and because of that, you can really be yourself."

And if the spark is there, you can easily extend the conversation over a four-course meal in the dining area, which is a sure-fire way to impress. The warm lighting, dark wood, and wrought iron decor offers a romantic ambiance.

"There's a lot of natural warmth that comes from the building that makes people comfortable," Brendan added. "It has an old-school feel."

In the spring, couples can move out to the patio with the glow of lampposts reflecting off the canal below. (It's no surprise that Bourbon Blue also won Honorable Mention for Best Al Fresco Dining).

When asked what the best first date dinner is, Brendan put together his very own chef's menu. He recommended starting with an appetizer of oysters on the half shell (a known aphrodisiac), followed by a wedge salad. As for the main course, he suggests ordering one of their best-selling dishes and perfect comfort food: southern fried chicken. He advises ending the date with Banana's Foster bread pudding. And he has a word to the wise.

"Whatever you do, nothing with garlic!" he laughed.

The fact that Bourbon Blue won Best First Date Spot two years in a row is an honor, Brendan explained.

"For me, personally, it's one of the more desirable categories,” he said. “It speaks to everything about the place, from the food, to the level of service, to the atmosphere. It means we're doing things right. That the consistency is there."

"It's fortuitous for others," Brendan said about meeting the love of his life at his very own restaurant.

After their relationship was spotlighted in Manayunk Magazine's Fall 2015 cover story, patrons have expressed feeling an even deeper connection to the establishment.

"So many people come up to me and say, 'Hey, I saw you in the magazine. You're the owner. That's a really cool story!'” Brendan explained. “First dates are so awkward as it is. The fact that one of us, if not both, is always here—that you can say, 'Hi,” see a friendly face, and that we're not a nameless corporation, it lends to that comfortability."

"We've had so many people propose here," Brendan added. "So many couples come in for engagement photos and want a photo op at their 'first date table.'"

Bourbon Blue also hosts countless wedding showers, rehearsal dinners, and even small weddings of up to 50 guests. But, for Brendan, knowing that his restaurant was the starting place of that elusive spark that has changed the trajectory of so many customers' lives, is humbling.

"Looking back, to think of how big of an impact we have had on people's lives," he said, "it's an awesome thing."