Gin And Bear It 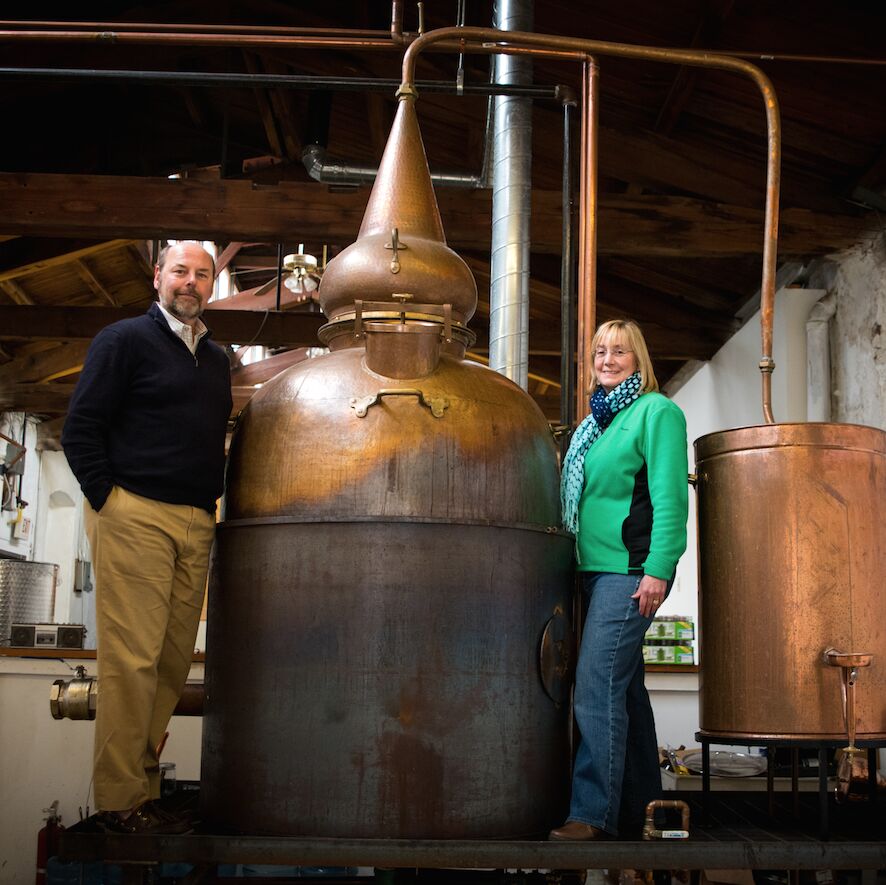 Manayunk has historically been known as a neighborhood of makers and manufacturers since its role as a booming mill town throughout the Industrial Revolution of the 19th and early 20th centuries. Though the times may have changed, some business owners continue the tradition by crafting their very own products within this community. This segment is designed to highlight these individual businesses and the products in which they specialize.

Walter Palmer and his wife, Katy, stand side-by-side in their distillery at 376 Shurs Lane glancing up at the 800 liter copper pot still as it evaporates and condenses their latest batch of Liberty Gin. The Palmers go through this process once a week, yielding roughly 100-120 bottles in a given session.

“The alchemy is somewhat mysterious,” Walter tells me as he briefly breaks from his stare at the 18th century-style apparatus. “We throw everything in that copper pot, which has magical powers in itself. We light up a flame to cook something that you drink and it physically changes your state. That’s a really powerful thing.”

Walter never intended on distilling spirits to make a living. In fact, he had a very successful career serving as the President of the General Building Contractors Association. But after a change in the Board of Directors in 2012, his 27-year span at the company came to an end.

Struggling to find a job that would pay his original salary, Walter began researching the craft of distilling. Katy took notice of her husband’s latest fascination and embraced it by granting him permission to invest in his very own still. Walter took distilling classes at Cornell University and was making trial batches of corn whiskey at home by 2013.

Walter eventually shifted his sights toward creating his very own gin. Since gin is one of the fastest spirits to make with no maturation needed, Walter could easily experiment with different recipes and send samples to friends, family, and various beverage connoisseurs in exchange for their feedback.

“As I looked for a job, I kept distilling partially for therapy to keep busy and active but also to learn a different craft, and people really liked what I was making,” Walter said. “So that was my Plan B and as I kept getting turned down from jobs, Plan B moved to Plan A.” 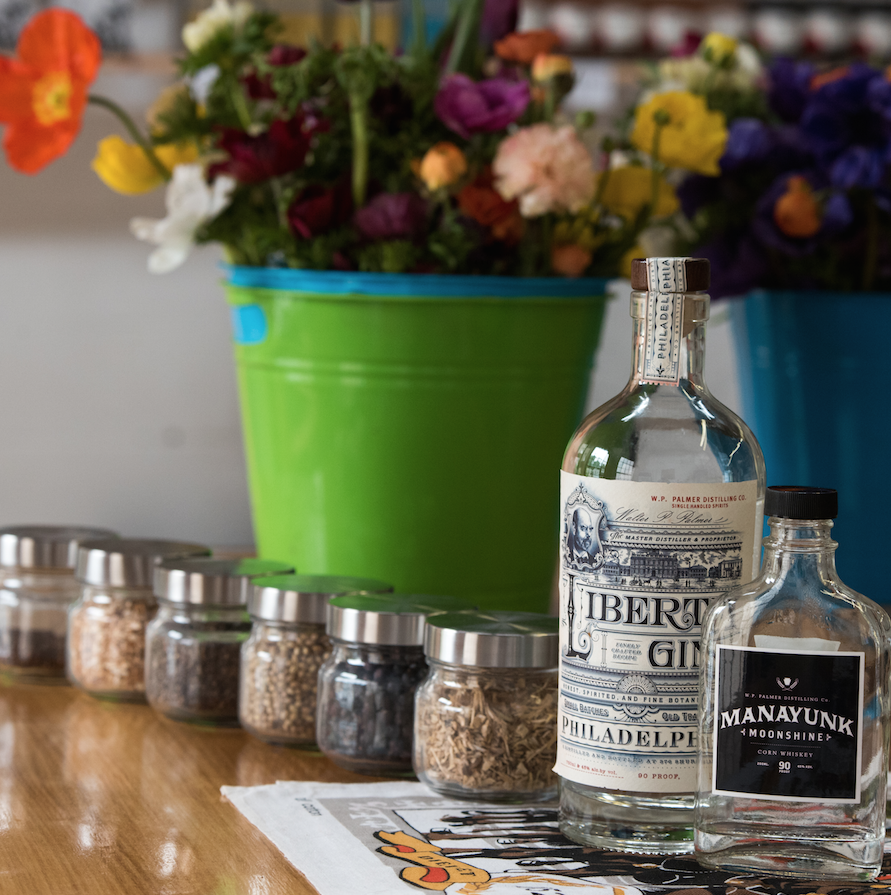 Starting his very own distillery was no simple task. In order to get the permitting from local, state, and federal officials, Walter had to hold a lease on a space that would allow distilling on its premises. Walter looked all over the city for a location to make his spirits and in 2014, he stumbled upon a section of the Manayunk’s Feltworks building on Shurs Lane that was listed for rent.

The Palmers were already familiar with the neighborhood. Katy lived in Manayunk while dating Walter and the couple even bought a house here when they got married and had a son before moving to Chestnut Hill. Knowing the town and the abundance of potential bars and restaurants to work with, Walter had made up his mind and by May 6, 2015, Walter was distilling his first official batch of Liberty Gin in Manayunk.

“The nice thing about this space is that we’re doing what it’s zoned for. We didn’t have to get a variance,” Walter said. “The community was built for this. Whether they’re making wallpaper or floral designs or beer or gin, this neighborhood has historically been about makers.”

One can’t ignore the craftsmanship behind Liberty Gin. Walter intended to create a gin that reflected the spirit’s origins. In his research, Walter came across an Old Dutch recipe with ties to the spice trade during the American Revolution that seemed to be the foundation of all gins thereafter.

From there, Walter sought to balance out the precise proportions of his six essential botanicals: Juniper, lemon peel, angelica root, cardamom, coriander, and grains of paradise. He created 57 versions of the recipe and after many accolades from his peers, Walter settled on one that came to be known as Liberty Gin.

“It’s very simple but it’s wonderfully elegant. That’s all it is,” Walter said. “Our gin doesn’t have to be bells and whistles and the John Philip Sousa band. It’s amazing how something simple can be so beautiful.”

And you can’t argue with the man. One sip and your taste buds immediately recognize the citrusy tones of lemon peel and cardamom. Out of the still, the gin clocks in at roughly 75% ABV until it is mixed with Pennsylvania spring water, which brings it down to 45% ABV. Even if you don’t normally drink gin, Walter’s product will show you there’s more to the spirit than your preconceived notions.

“A lot of times, people come in here and tell us how they had a bad experience with gin when they were younger,” Katy said. “Slowly but surely, we convince them to try ours and we love to see their facial expressions because they can’t believe how smooth it is.”

In the first year of business alone, Palmer Distilling has witnessed such a great deal of growth. Liberty Gin is now available at 15 different state stores in the region with another five in the works. Some of our local bars and restaurants also seized the opportunity to stock their shelves and create cocktails with such a fine, locally sourced gin including The Goat’s Beard, Manayunk Brewery, MAYA.J, and Anastasi Raw Bar. The Palmers have even won a silver medal at the San Francisco World Spirits Competition this past March for their gin. 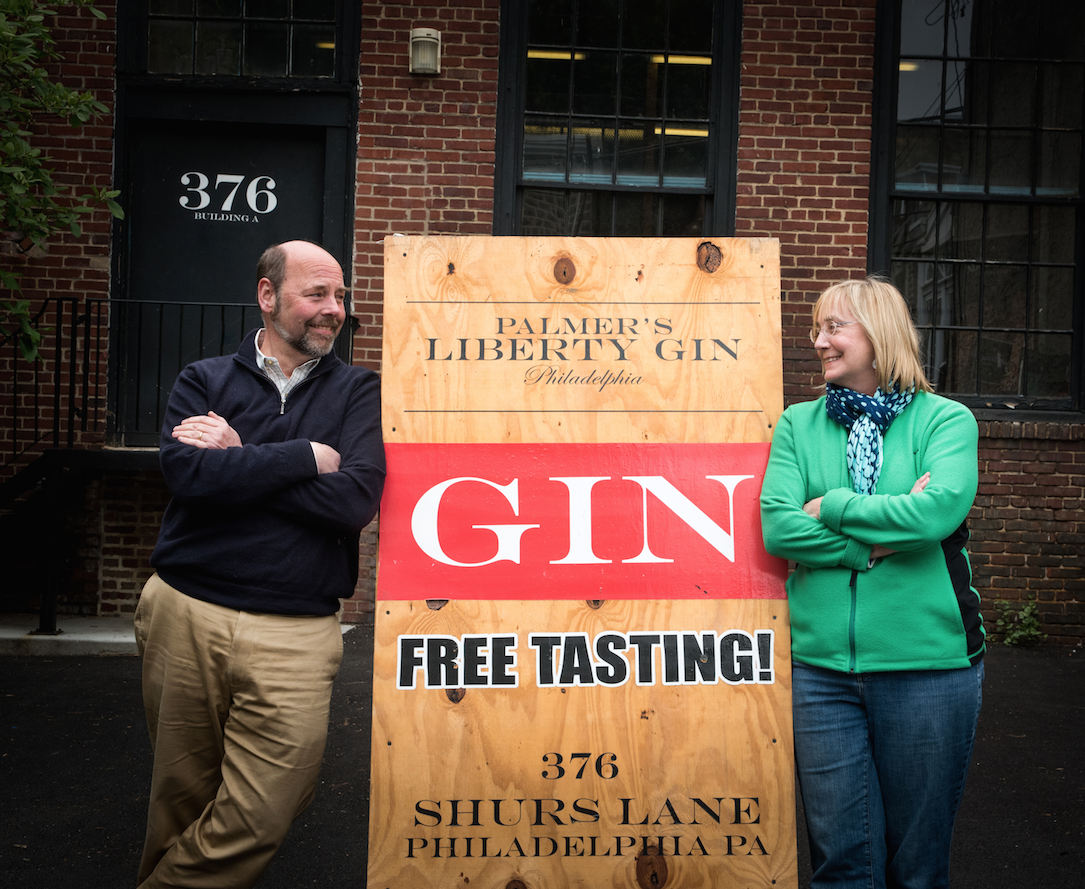 But Palmer Distilling is not limited to Liberty Gin alone. Walter’s hyper local “Manayunk Moonshine,” a simple corn whiskey with a big salute to the history of the Greater Philadelphia area, is only available for sale at his distillery.

“This moonshine is just corn and barley, but it happens to be Bucks County corn, Chester County barley and George Washington’s recipe,” Walter said. “Washington had this on his saddle at Valley Forge when he was fighting the British. The guy changed the world and this is what he was drinking.”

Looking ahead, Walter and Katy have big plans for their business. In addition to free tastings throughout the week, the Palmers are looking to host a number of small events in the distillery this summer like live music and art shows, all while whipping up cocktails now that they’ve added a wooden bar at the front of the space. Walter has also discussed broadening the number of brands under Palmer Distilling by making other spirits further down the road like rum, whiskey, and limoncello. As for right now, Walter seems comfortable having his hands full with providing the Philadelphia region with his iconic, award-winning gin.

“We had people come into the distillery a day or two after Thanksgiving to buy bottles. They were at their family dinner, had a cocktail with our gin in it and loved it so much that they couldn’t leave town without it,” Walter said. “To me, that’s the greatest part of this whole thing. We’ve created something that goes into somebody’s house and actually changes them into a better state. Then they come back here and tell us about. It’s just a wonderful thing to me.”