Meet the masterminds behind the mouthwatering, slow cooked Deke's Bar-B-Que, Derek and Jackie!  Derek and Jackie originally had their start in the high end catering and event planning industries. However, wanting a bigger and more exciting adventure, Derek decided it was time to open up his own restaurant. Upon leaving these industries, Derek did his research and discovered that Bar-B-Que was the next big thing and he nailed it! When deciding on a name, Deke, Derek's childhood nickname, was the obvious way to brand his restaurant. On October 1st, 2010 Deke's was opened for business. Ever since, Deke's Bar-B-Que has been serving up locally sourced, slow-cooked BBQ. Two years after opening, Jackie left the high end catering and event planning industries as well to join Derek full time.

Don't experience the hassle of traveling down South for decent BBQ. Find even better BBQ at Deke's right in your neighborhood. Deke's Bar-B-Que found its home within a huge garage in Manayunk. The garage offers a "fun, casual and low key atmosphere" with a brick patio, fire pits, and picnic tables! Although there is limited seating, you can find a full bar! Throughout the restaurant you will find beer signs, license plates and even pin up photos. It's like having a southern Juke Joint right in your Manayunk neighborhood! Don't have time to sit in? No worries, head to Deke's Carry Out location at 4901 Ridge Ave! The Carry Out location has the same great signature BBQ flavors just on the go! Deke's also caters! Deke's can accommodate your every need so call today!

After deciding on BBQ as the theme of the menu, Derek handcrafted each of Deke's signature BBQ sauces. The original and tangy Q sauce tastes great with Deke's brisket, chicken and ribs! "Carolina Red" is a vinegar based sauce that compliments the pulled pork quite well. Like it hot? The "Triple X" sauce is hot enough to get the spicy flavor, but it will not overpower the smoked BBQ flavors. Indulge yourself in Deke's Sloppy doc, potato wedges with Deke's cheese sauce, pulled pork, slaw & pickles! Need something more filling than that? No problem, try the Fat Dude: brisket, pork, AND sausage with cheese, onions, and sauce! The Sloppy doc and Fat Dude are unique to Deke's menu.  You won't be able to find these BBQ flavors anywhere else! 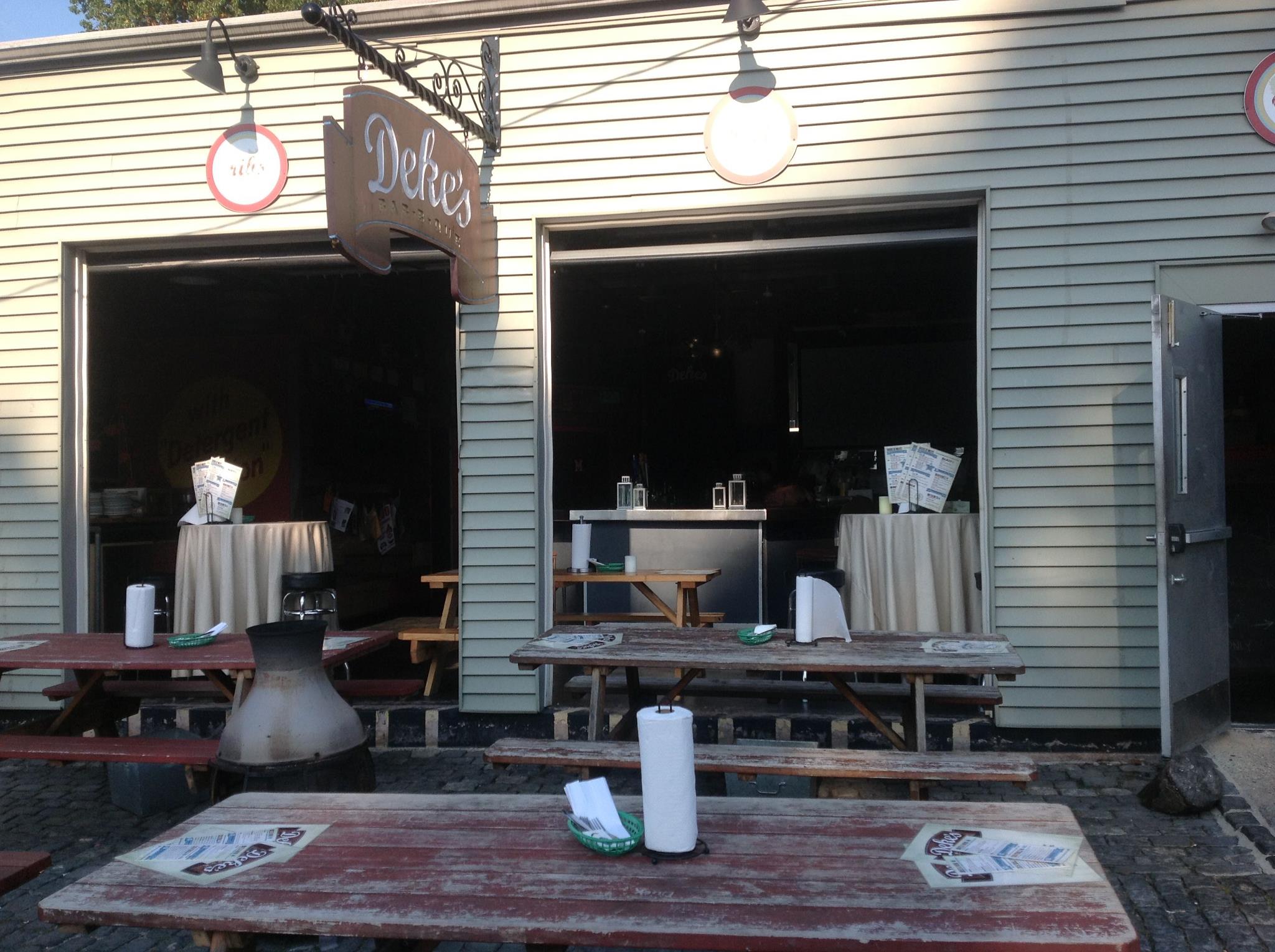 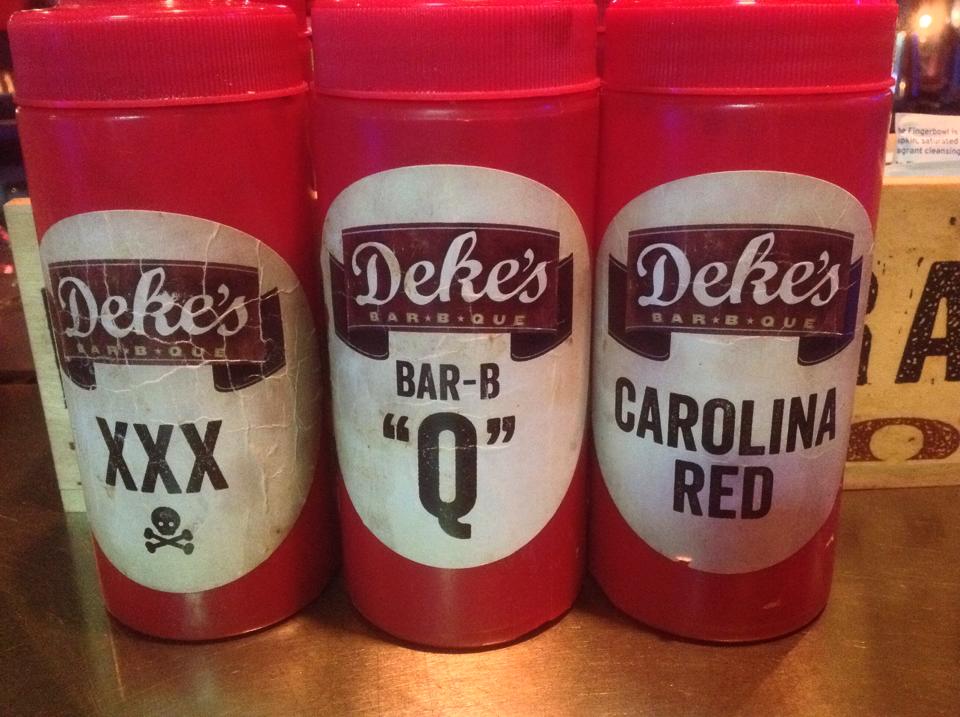 It is not just the sauces that make Deke's Bar-B-Que the best there is. At Deke's  you are guaranteed only the freshest of meats and flavors. All of Deke's meats and produce are locally sourced and brought in fresh daily to ensure that customers receive only the best BBQ. Deke's is preparing food every day. In fact, each day has its own prepping list.  During busy seasons (which is always, Deke's is always in high demand) the smoker is going almost 24/7 to cook the meats and to get the flavors just right! Everything on the menu is homemade! While Deke's doesn't experiment with its signature flavors or sauces, Jackie is expanding the menu to include homemade trail mix, beef jerky, and even fudge with a smoke flavor! Come to Deke's and see for yourself why fresh ingredients makes BBQ even better!

Jackie said that Deke's greatest accomplishment is "creating an amazing loyal following." There are several factors that makes Deke's and its BBQ unique. Jackie and Derek's secret weapon is that they are a husband and wife team. Deke's is family owned and operated so when you dine in or carry out you feel as part of their family. This has allowed Deke's to gain several "regulars" at both the garage and take out.  When these customers come into Deke's, Jackie and employees alike know their orders. However, Jackie also attributes Deke's success to its consistency. Deke designed the BBQ sauces 5 years ago and will not change it! Customers know each time they come in that the BBQ will taste the same as it did the last time and the time before that! If you haven't tried Deke's BBQ yet, try it once and you'll become a regular too!

Deke's Bar-B-Que has big dreams that Jackie and Deke are determined to make a reality!  Although they will keep future locations local, Deke's has received requests to expand to Boston, Connecticut and the Jersey Shore! This proves that Deke's Bar-B-Que is the best! Jackie and Deke hope to have 2 more locations within the next five years, but ideally would like to have another location within the next year! Deke's Bar-B-Que has already expanded. The garage could not accommodate take out and the catering. Deke's needed a separate location to concentrate on these two aspects of the business. on April 15th, 2015, Deke's Carry Out and Catering was open for business!

Deke's continues to build itself a name as they offer the best BBQ in the area! Deke and Jackie are Manayunk locals! They chose Manayunk not just for the location for Deke's Bar-B-Que but for a place to call home. Manayunk is the place where they bought their first house, where they live now, and where they hope to retire (if they don't retire somewhere warm!). Manayunk is their neighborhood! If this week's 7 Day Spotlight hasn't convinced you that Deke's is the best, then seriously head over now to one of their locations for slow-cooked, finger-lickin', delicious BBQ!