XXXHomeXXXMNYK MediaXXXMNYK BlogBUSINESS SAVVY: In the Mix of It All

BUSINESS SAVVY: In the Mix of It All 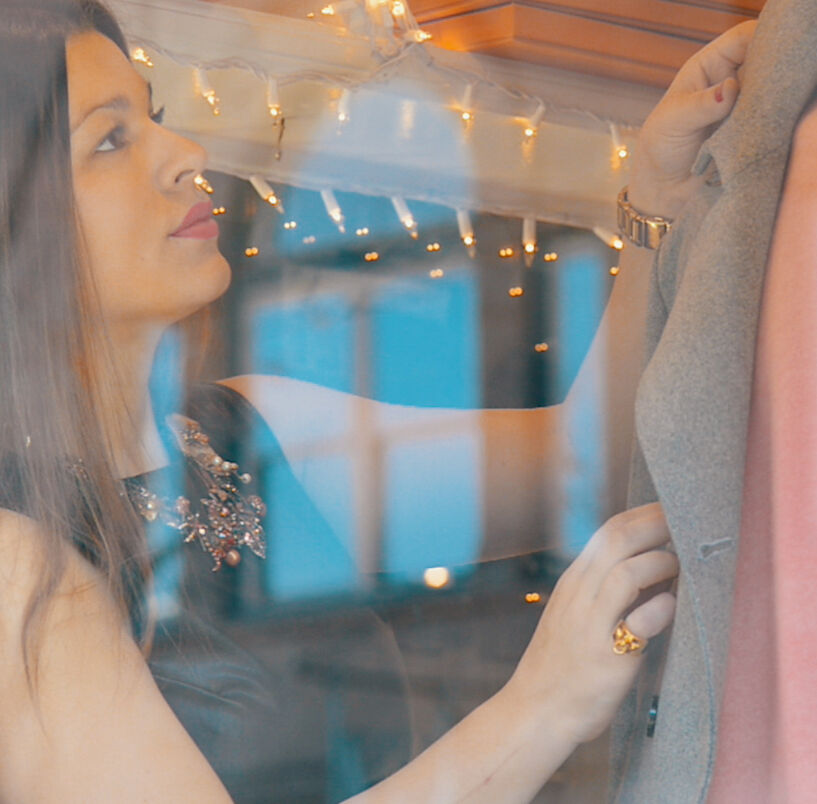 It was the summer of 2009 when Ljupka (loop-kah) Neducsin had an idea. She set up a pop-up consignment store in an empty storefront on Main Street during the weekend of the Manayunk Arts Festival with no expectations. “Something that was supposed to be for one weekend with one consigner has turned out six years later to be quite a successful business with over 400 consigners,” Ljupka said.

The successful business she’s talking about is her high end consignment boutique, Remix, which she owns with her sister Tanya.  Though their shop is located in the heart of Manayunk, their story and love of fashion began halfway around the world in their home country of Macedonia.

The Macedonian culture that the sisters were raised in heavily focuses on fashion. “Everyone makes an effort to get dressed even if you’re going to the corner store or your neighbor’s house for coffee,” Tanya said. But high end designer items were almost impossible to find in their small country.

It wasn’t until their friends moved to Paris and Munich and returned with beautiful clothing and handbags that Ljupka and Tanya’s love for high end designer fashion began. “Every single time they came back to Macedonia they would bring us pieces,” Tanya said. “It was probably around 2000 when we actually bought our very first Louis Vuitton bag.”

When Ljupka left Macadonia to travel to the States in the Summer of 2005 it was then that she first saw Chanel, Louis Vuitton and Prada stores. “I got to see the pieces, to touch them and understand the fabric and the craftsmanship that goes into making them,” she said.

After returning to the States a second time, Ljupka met her now husband Derry Neducsin while bartending in Manayunk and working on a business degree. While Ljupka got married and began settling down in Manayunk, Tanya was also studying business in London. But when her sister called and told her she was pregnant, Tanya was on a plane to come help Ljupka with the store for what originally was going be just for a few months. That was 2011, and well, just like Ljupka, Tanya felt at home in Manayunk and never left.

“What makes Manayunk unique for our business is that it’s right in between the Main Line and Center City, it’s the perfect destination,” Tanya said. “It’s a vibrant neighborhood and all of our neighbors are friendly.” Ljupka adds, “It reminds us of a European city.”

If you’re looking to consign pieces at Remix, each item has to hit a specific list of criteria. First, it has to be a high end designer item – from Hermes to Chanel and Louis Vuitton to Oscar de la Renta, Remix sells items from some of the top designers in the world. Next, it’s all about the condition of the piece, what it has to offer and if their customers would desire it. Once pieces are selected to consign, that’s when the fun begins for Ljupka and Tanya. They begin scouring the internet and reaching out to their extensive business network around the world to find the original retail price, if it’s a limited edition item and how many were made, and who collects them – that’s how they come up with the final sale price. “The most fun part for me is doing the research and finding some pieces are so limited there are only 200 of them in the whole world yet in our small neighborhood in Manayunk, we have them,” Tanya said.

Once the items are priced, they are placed on the floor for three months, sometimes longer for higher end items, and the consigners wait to see if their beloved pieces have found new homes. Their rarest pieces are generally sold online and are sent to good homes in Paris, Tokyo, Hong Kong, Australia, New Zealand and other fashion ports around the world. Some of the rarest and most valuable pieces they have ever had at Remix were Oscar de la Renta one of a kind embroidered jackets. After Tanya couldn’t find prices for the jackets anywhere online, she spoke with someone at the Oscar de la Renta office who offered to buy them back from her. “These pieces are priceless,” Tanya said. “We sold all of them but one, and I’m holding on to it.”

For of their consigners, the items aren’t just a piece of clothing or a simple handbag, they’re collector items that are often hard to part with. “Most of the time it’s sentimental,” Ljupka said. Which is one of the reasons the sisters work to not only satisfy their customers, but also their conisgners. “I feel confident saying that we pay our consigners more than any other consignment store,” Ljupka said. “We know how much they have spent for an item so the return has to be on the bigger side. We do our research, but we like them to have a say in the pricing, no other consignment store lets their customers have a say.”

From the Main Line to New Jersey to New York, Ljupka and Tanya will travel anywhere to pick up quality consignments items. They even made a trip down to Florida to pick up items from a previous consigner who was a woman who had two of everything Ljupka said. “One black Chanel bag with a gold chain, the same bag with a silver chain and 30 pairs of the same shoes in different colors,” she said.

Then last spring, Tanya took a drive to another consigners home to pick up what they thought was going to be two Chanel handbags.  Tanya did return with two bags – two full garbage bags of over 40 Chanel vintage bags. “That’s what excited me,” Ljupka said. “I don’t even know how to explain it to you – it’s like, ‘This is it, this is what we have been working for, it’s happening.’”

As Ljupka explained, a lot of their customers can afford to go to Chanel and buy a brand new bag for $4,000, but that’s not the fun part, the fun part is finding a vintage and rate limited edition bag. “They are going to pay half for a vintage bag now, but in 10 years down the road, it will be worth three times more than they paid for it,” Ljupka said. “It’s the value that’s intriguing about the pieces.”

And don’t be fooled by the price, Remix has sold some Chanel bags for $5,000 more than the best selling bag in a Chanel store which may go for $4,000. “It’s all because it’s rare and one of a kind, because we go and we find it, and we deliver it to our customer, it’s all about the hunt,” Ljupka said.

On top of their counter sits a book, a waitlist of sorts, with a list of items their customers most desire. Ljupka and Tanya do their best trying to find these items from their over 400 reoccurring consigners and growing. “They just keep coming,” Tanya said. “Clearly out their closets seasonally and bringing us more items.” Their goal is to match their consigners items with customers who want them, and when they can’t find a match for an item on their waitlist, they’ll hunt for them.

To Ljupka and Tanya, Remix means the mergence of old and new couture. Although their high end consignment items are the star of their businesses, the sisters also sell new apparel from up and coming designers. One of those designers, RISTO, happens to be from Macedonia as well and even though you can find him selling at Neiman Marcus, you can find his clothing at Remix for a fraction of the price.

It might be obvious to assume that the sisters purchase most of their clothing from the consigner items in their own boutique, but they have to control their urge to not keep everything for themselves. “I know exactly when something comes into the store if I will buy it or not,” Tanya said. Ljupka keeps her focus mainly on handbags, “I do collect those,” she said. “You would die if you saw how many I have.” Over 100, I asked? They both stalled and laughed together. “We probably have one of the nicest collections of handbags there is,” Tanya said. Chanel handbags, Ljupka’s favorite, take over the majority of their collection. “I cherish those pieces, I see not only value in those, but I cherish them,” she said. “When someone calls and said they have a lot of Chanel pieces – oh my god – that’s when I have a heart attack.” Tanya laughs and adds, “Ljupka is a collector, she’s a Chanel freak.” Though her lifestyle at the moment (as a mother of two) has pushed Ljupka into carrying a Louis Vuitton diaper bag, when she goes out as the real her as she calls it, then she always carry’s Chanel.

When it comes to their personal styles Tanya describes hers as avant garde, influenced from her time spent studying in London. “High Street fashion just blows my mind every single time I go,” she said. “It’s punk and it’s rock and you never see that in Macedonia.” Tanya carries a Birkin handbag daily, but she holds her Blondie leather jacket closest. Hysteric Glamour launched a line of limited production clothing inspired by the designs of Andy Warhol including this leather jacket, which was worn by Courtney Love during one of her tours.

Ljupka’s style on the other hand, is more classic with black and neutral colors being the base of her wardrobe.  Ljupka is the kind of person that can mix a $10 shirt with a $3,000 handbag and she pulls it off perfectly. To her, mixing is the key. “If I have to choose, I will always choose well made accessories over clothing,” Ljupka said. “A wallet you can use every day for three years, but a shirt, I can’t wear it that long.” Ljupka’s most prized possession is just that, it’s her Takashi Murakami commissioned Louis Vuitton wallet which she’s been carrying everyday for the past three years – and as you might have guessed, she bought it at Remix.

Sisters don’t always have the best working relationship, but Ljupka and Tanya seem to have it all figured out.  “Ljupka lets me do what I do best,” Tanya said. “I pick up the consignment items and do the daily business and chores in the store, but when it comes to the business side, Ljupka, that’s her thing. She’s the business side and I’m the creative.”

For Ljupka, the ability to leave the day to day aspects of running the store in Tanya’s hands as she raises her two children is the biggest gift she has. “The biggest asset to the store is not the consigners or myself, it’s Tanya,” she said. “Tanya is what Remix is because I did step back a little bit with the kids.”

For Tanya running the store comes naturally, it doesn’t feel like work. “It’s a pleasure to wake up in the morning, get dressed and come to work, it’s what makes me happy,” Tanya said. “If you are happy and love what you do, it goes to the customer.”

Remix has big plans in the making, but the sisters aren’t ready to disclose them yet. “You’ll have to keep up with us to find out,” Tanya said.