Your Guide to All Things Art in Manayunk 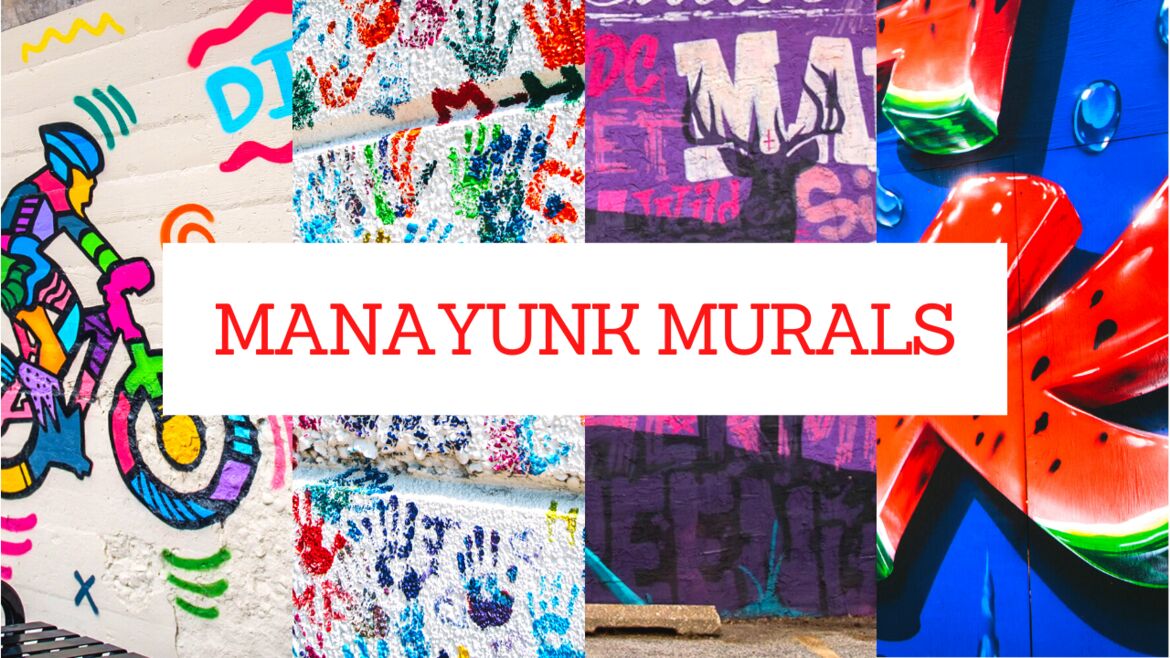 A stroll down Main Street Manayunk is a real treat. In Manayunk, no matter where you look, you’ll see amazing works of art. Here is your guide to all things art in Manayunk. 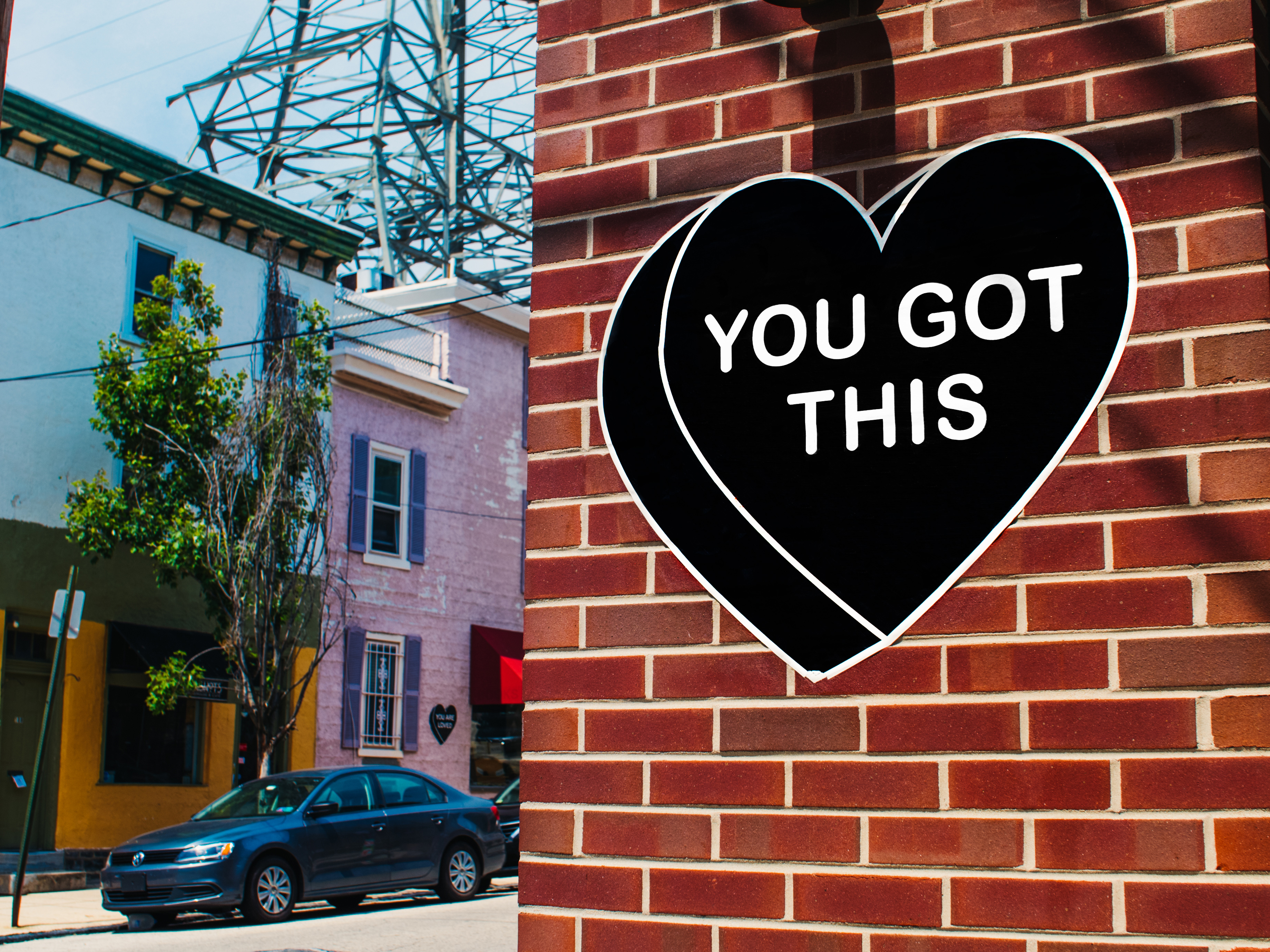 Amberella, who created these positive sayings after leaving a toxic relationship, made these pieces as part of a series to help others and herself regain confidence. “The messages are universal to everyone. People can sense authenticity,” Amberella said. Look for these black-and-white, candy-like Power Hearts at the Spiral Bookcase, United Makers, Taqueria Feliz, and The Wall Cycling Studio. 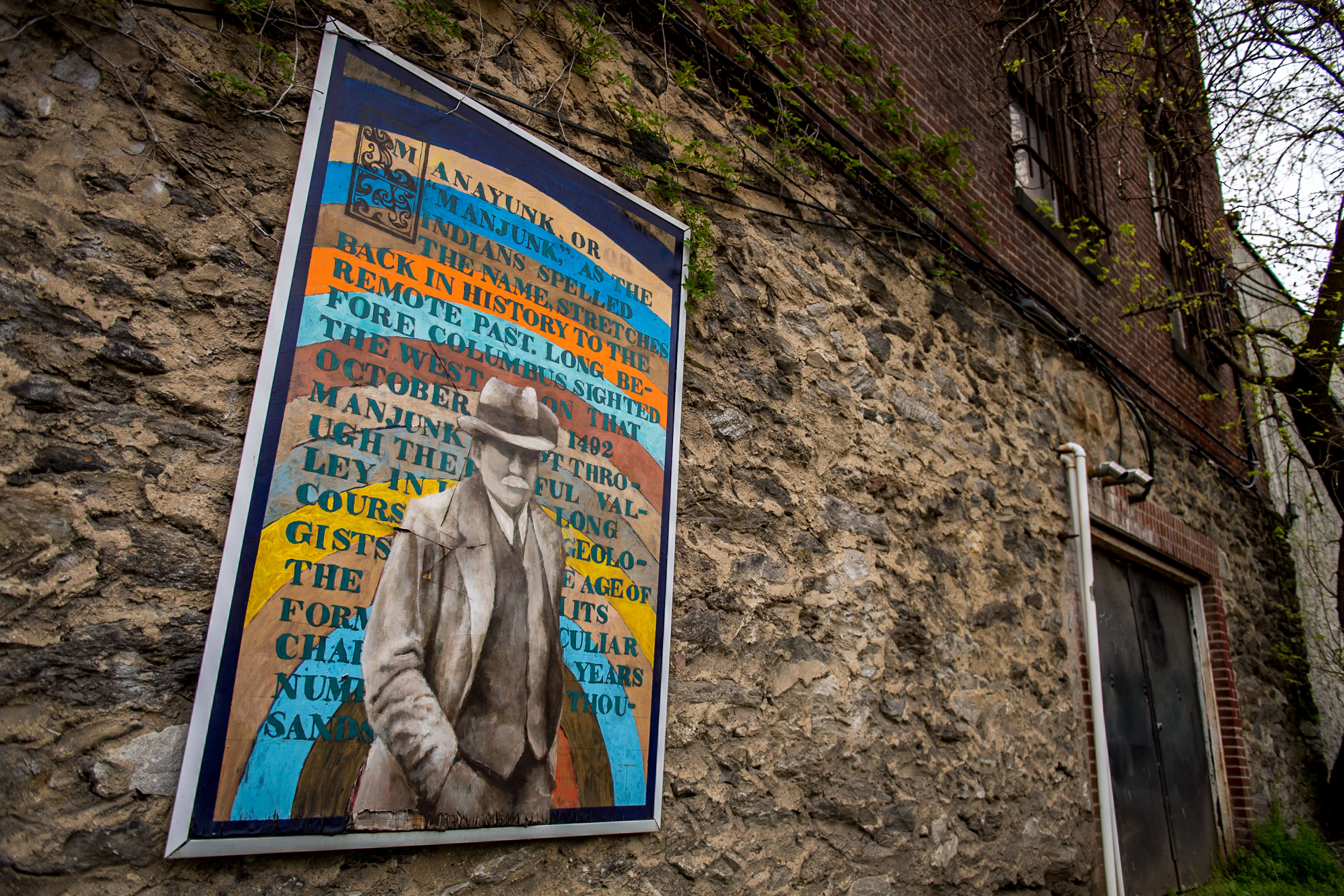 In 2011, Mat Tomezsko, a Philadelphia native and the artist behind the 30 mural panels that make up “Look Long & Look Good,” created portraits that feature people from all walks of life and many points in time. He selected his subjects from faces out of the crowd from historical records, faces he saw in crowds in Manayunk, and children, the future of Manayunk, that he saw strolling the street. These portraits can be found all over Main Street, so keep your eyes peeled! 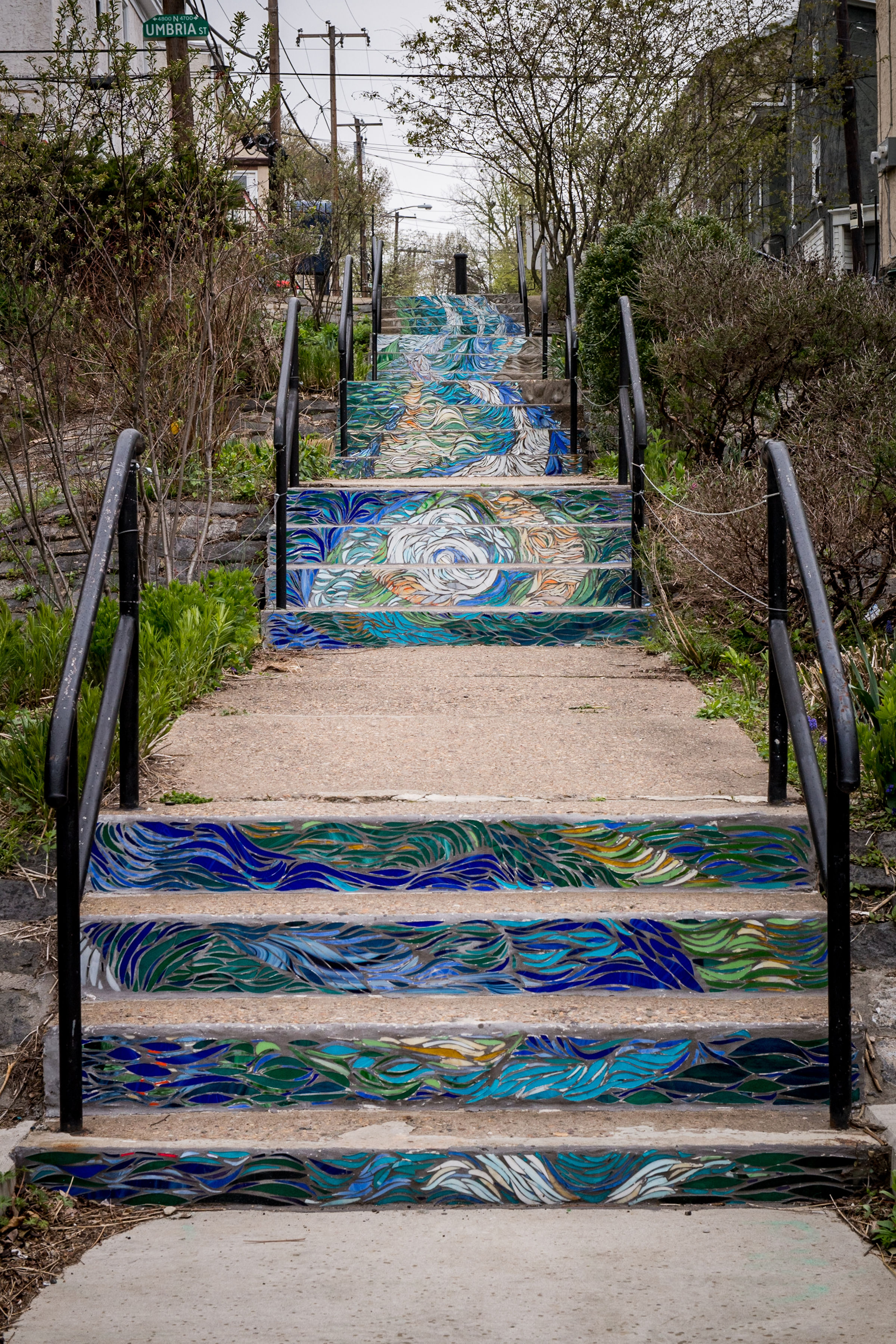 “Water Under the Bridge” - Paul Santoleri

When asked what inspired this mural and mosaic, Santoleri said, “I had a vision of doing a stained glass piece of the rises of the steps. It would be like the flowing water.” Located at Fountain Street steps along the towpath, this masterpiece, which was completed in 2015, features a river mixed with reeds, turtles, and other aquatic life that call the canal home. Although the canal was used by mills in the past, it is now repurposed as a place for runners, cyclists, and walkers who can appreciate the natural beauty and art of the area. 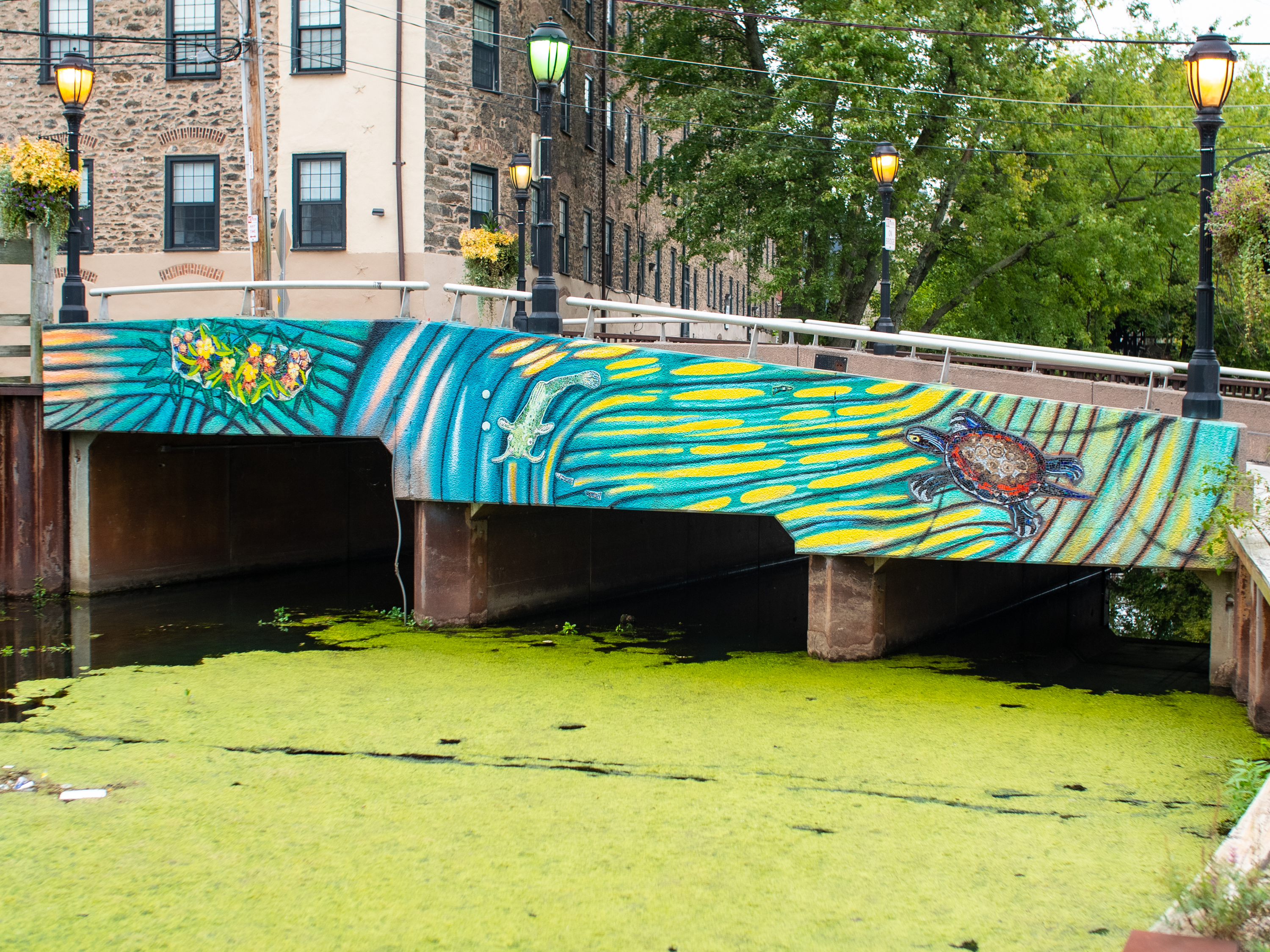 Located at the Cotton Street Bridge, “Tulpehanink nta,” which means “turtle creek” in Lenape, is a nod to the Lenape, who are native to this area. This art combines both paint and mosaics, and it features a local turtle, a catfish, and milkweed, which attracts monarchs. “I try to respond to the situation at hand, so my work often varies from piece to piece,” Santoleri said. “I believe there is a consistent thread that comes out of my hands. These are tiny mosaic pieces and I have not used that technique in many other public artworks.” 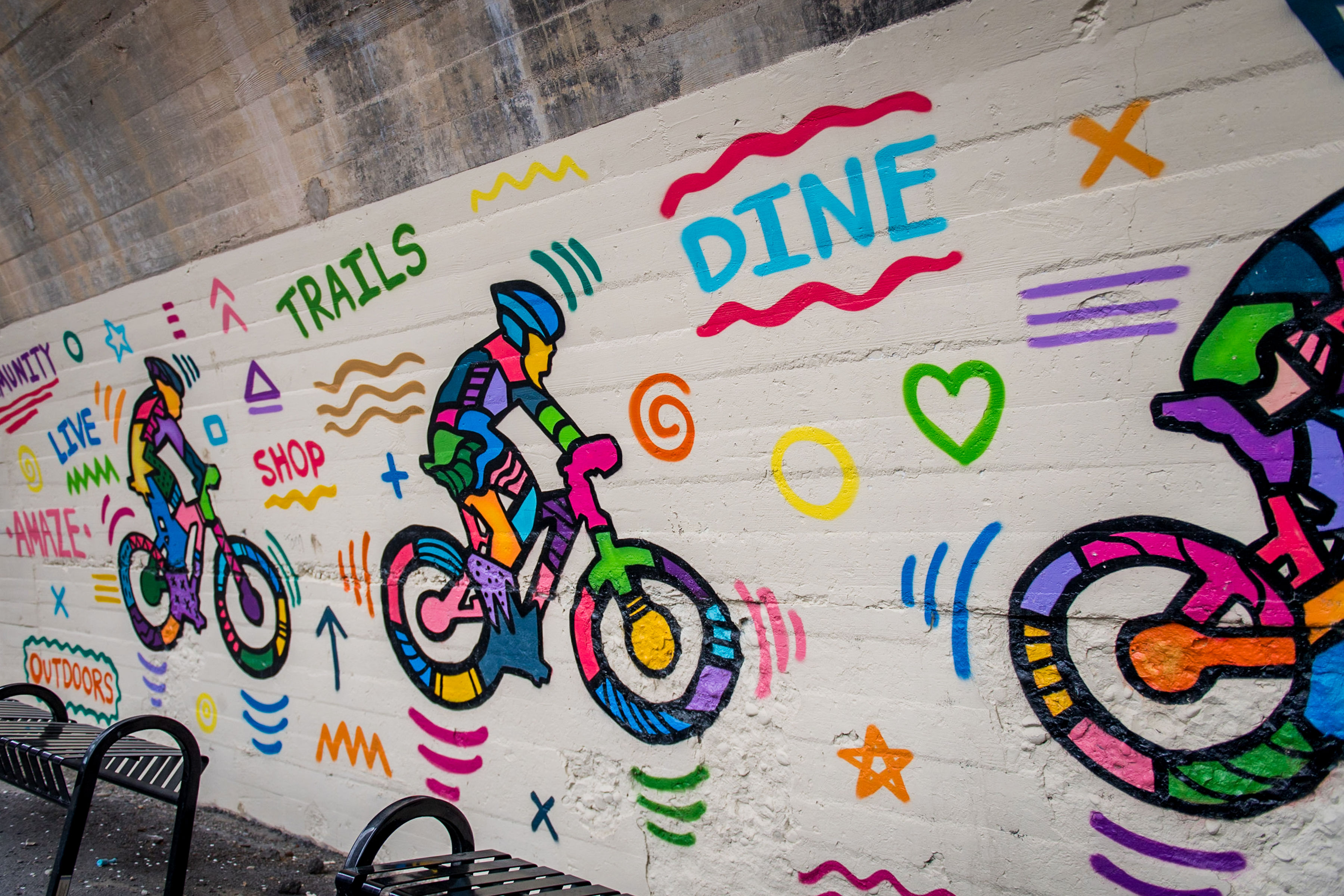 Completed in 2017, this mural can be spotted at the intersection of Main and Green Streets. This mural, which depicts three bicyclists climbing one of the steepest hills in Manayunk, serves to motivate many of Manayunk’s bikers. Onlookers can see words like community, outdoors, trails, amaze, shop, and play, all words that perfectly describe Manayunk. “In a lot of my pieces, I try to include some affirmation,” McIlwaine said. “I like to put a lot of words in my pieces to give it something a bit more tangible.” 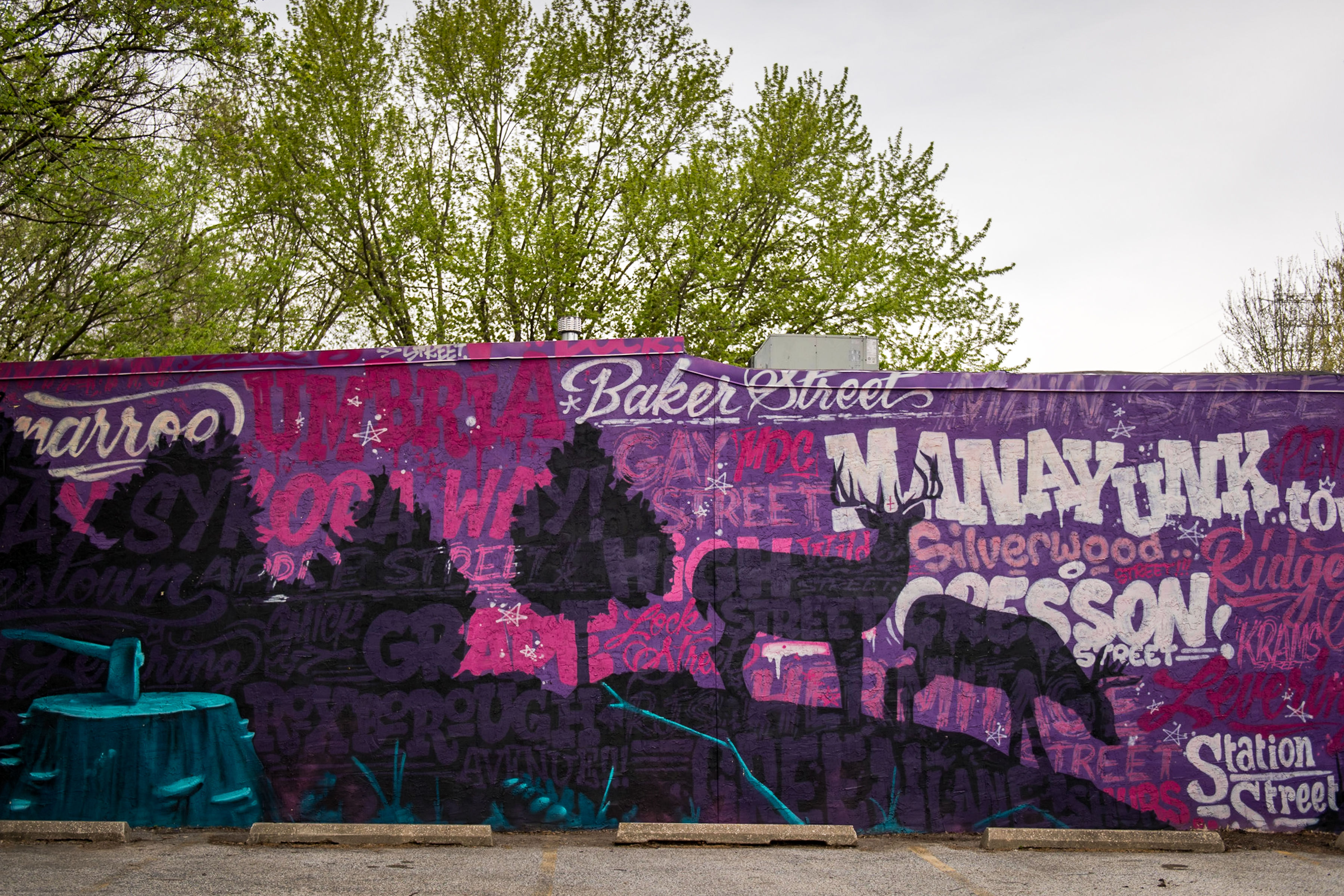 The combined effort of two talented artists resulted in a mural for the books. It features deer, an animal native to this Pennsylvania, against a background of many street names found in Manayunk. Catch these deer at 4000 Main Street. “This design really fit this area,” Lovett said. “We just wanted to have an impact.” 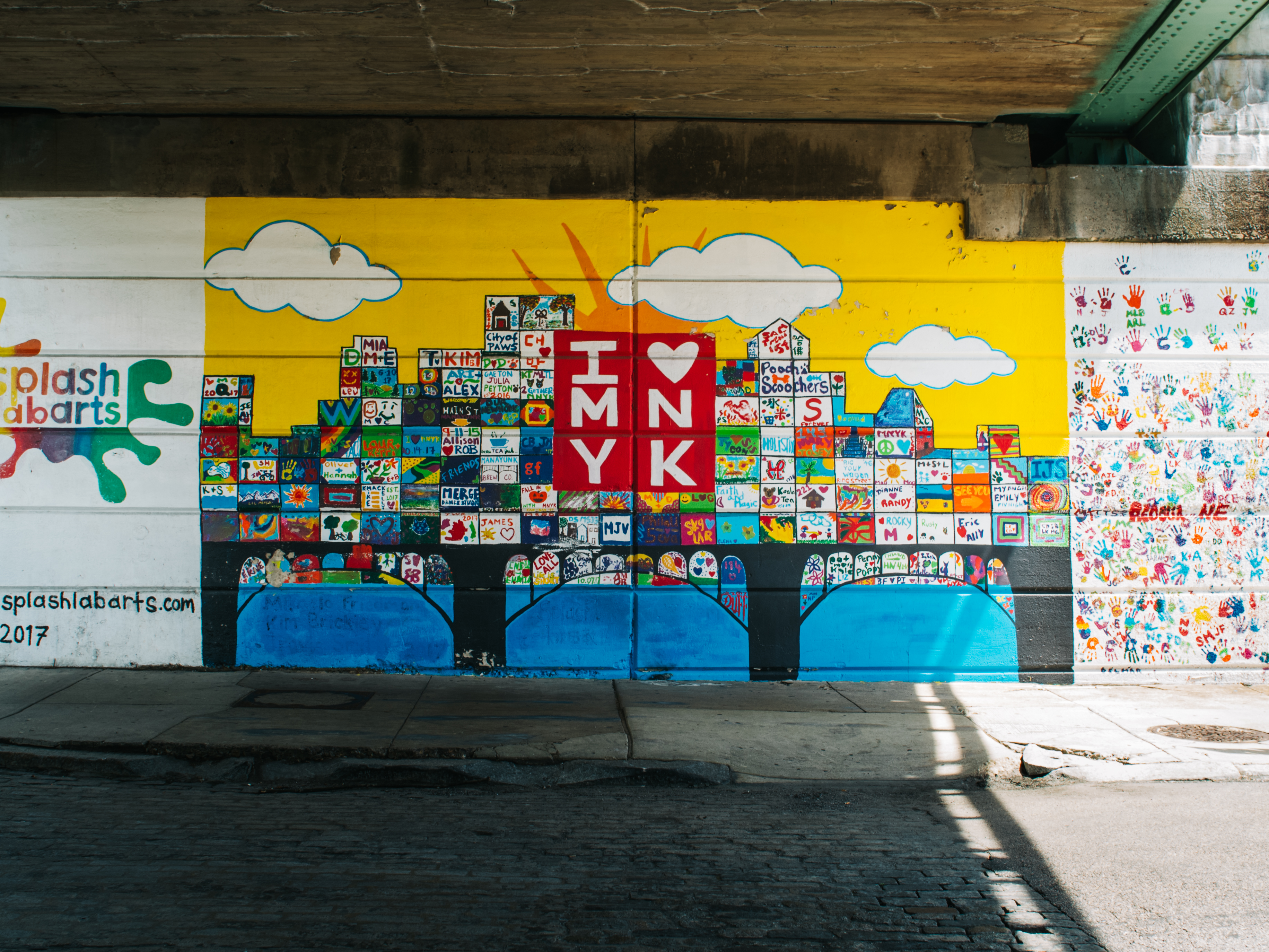 Who doesn’t love Manayunk? This mural was made by the community in 2017 and highlights the greatest part of Manayunk - the people. One look at “I Heart MNYK”, and anyone can understand the love that the residents have for this town, as this art features the local businesses, people, and a rainbow of handprints. Appreciate this mural in its full splendor where Cresson and Roxborough Streets meet. 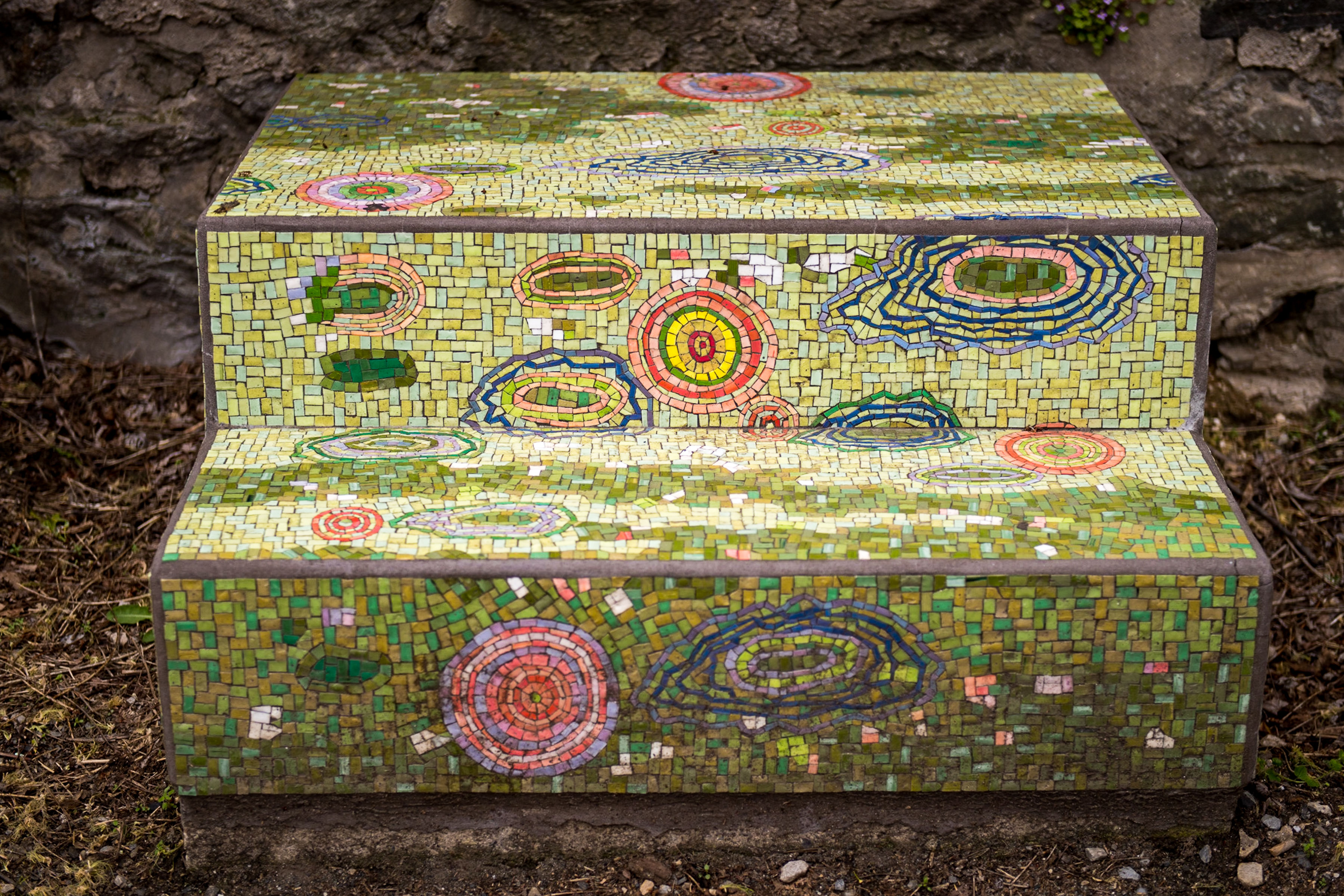 Spot these nine concrete stoops splashed with the colors of the rainbow along the towpath between Lock and Cotton Streets. Completed in 2006, Pieri worked with children at North Light Community Center for inspiration and design — it’s why many of the stoops feature turtles, fish, and flowers. The stoops are a perfect place to stop along the canal to sit, chat, and take a break. “It’s really great that this art project is being used. You’re sitting on a work of art,” Pieri said. 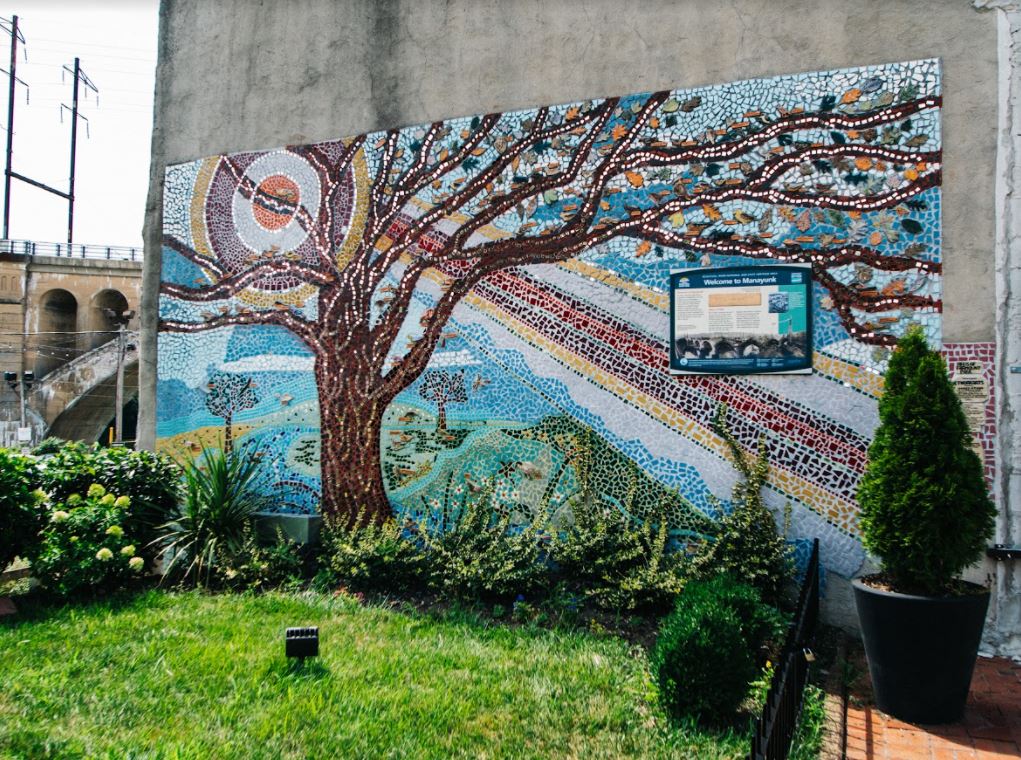 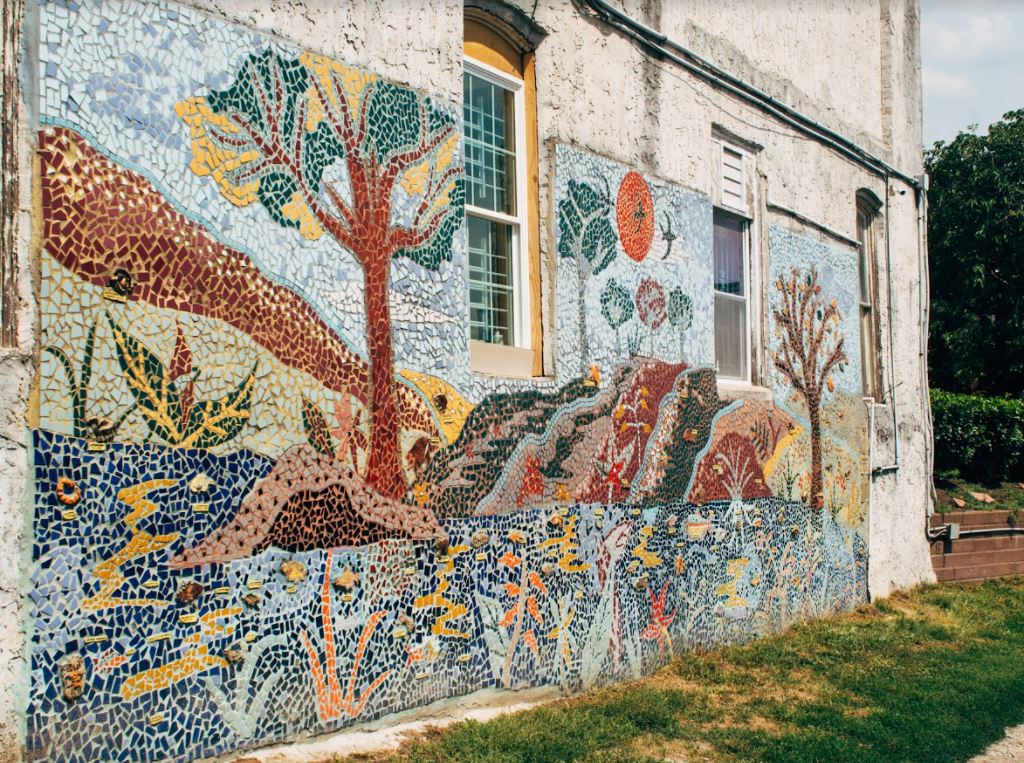 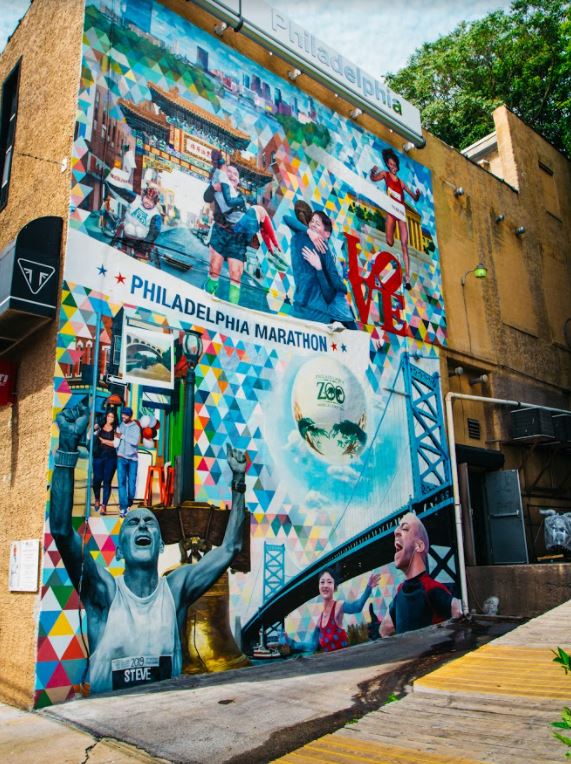 Since 1994, the Philadelphia Marathon has been run by thousands. Located along the route of the race on the outside of the Triumph Building, this mural was pained in 2019 to celebrate the marathon’s history, several iconic sights that the run passes, and the diverse racers who run the race. Jog by this mural at 3901 Main Street. 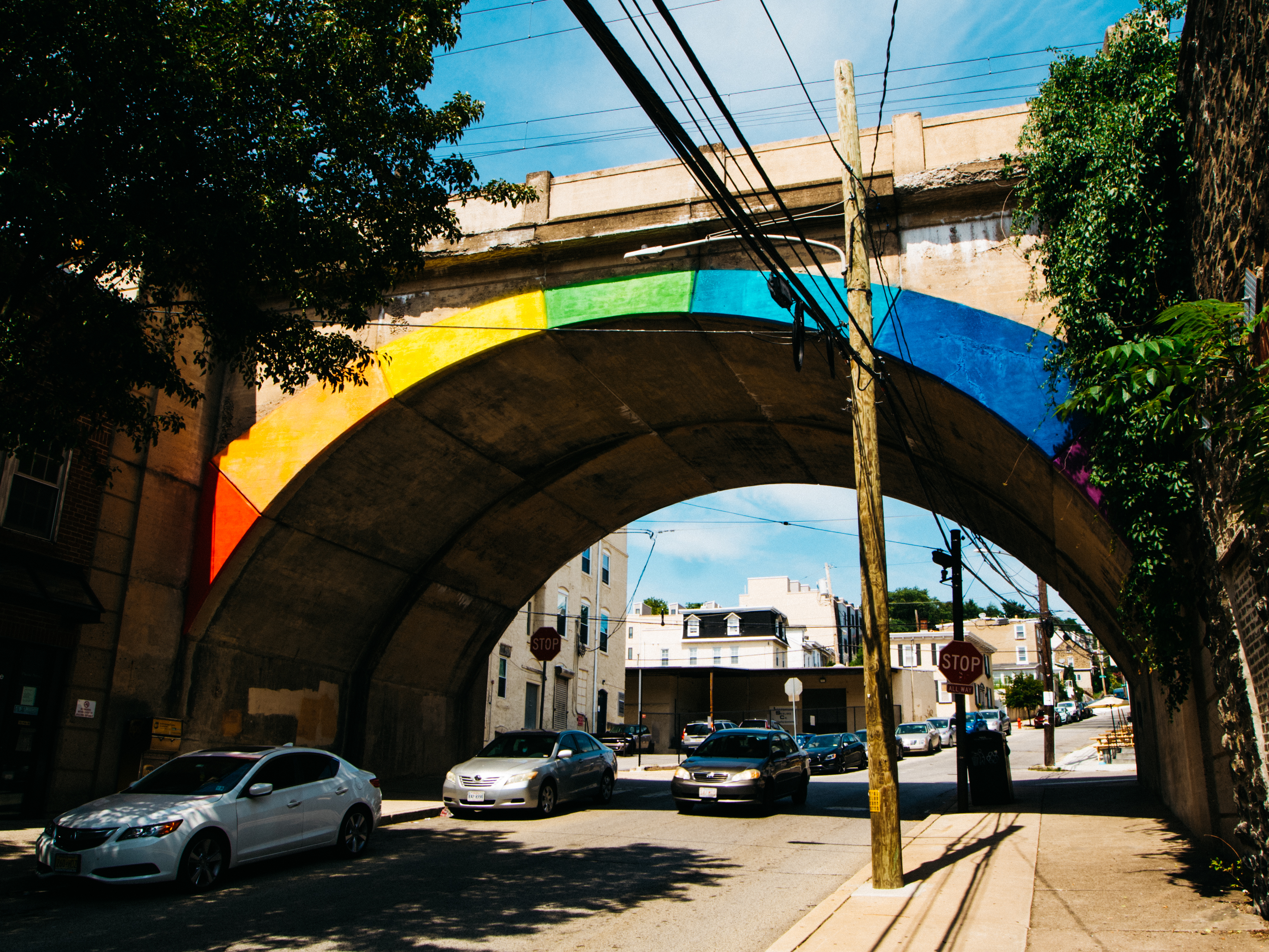 In June of 2020, Michelle Smith, also known as Sugar Cadavers, installed “Rainbow Bridge” at the archway found at the intersection of Shurs Lane and Cresson. “I designed this mural to be playful and colorful and to spark joy and hope in the people who pass by it,” said Streets. The bright rainbow of colors creates a happy, positive mood in any viewer. 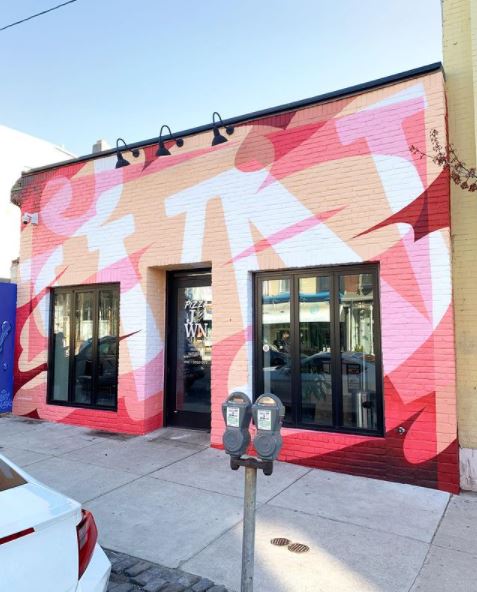 Yum! Who knew you could paint a building like pizza? Painted in 2021, find this mural on the exterior of Pizza Jawn, one of the most popular pizza places in Philly, at 4330 Main Street. "Pizza sauce & dough inspired colors, saucy ladle swirl motion with an oversized @pizza_jawn logo that’s not so subtle," said painter Jimmy M. 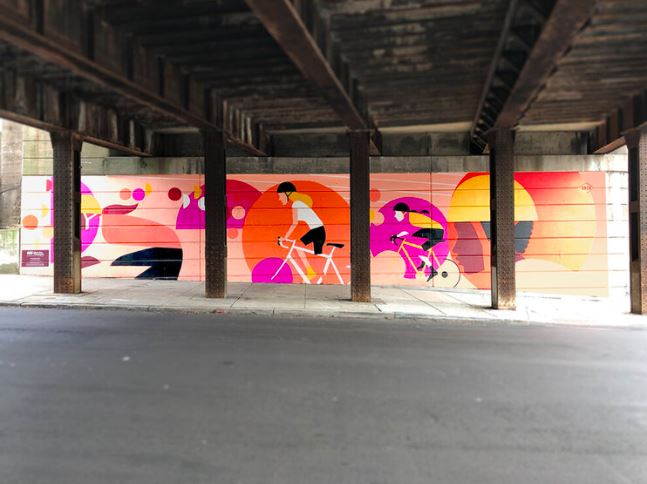 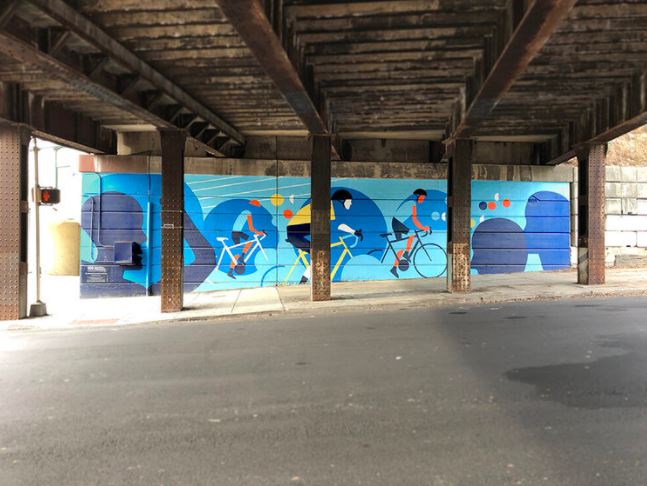 "The Liberty Classic" and "The Philadelphia International Championship" - Eleanor

Take a spin down Leverington Ave to see these murals, which were painted in 2019, under the regional rail trestle. These murals depict the men’s and women’s pro races that came through Manayunk for many years. Now, the area marks the beginning of a long climb for those leaving Manayunk or city biking for those coming down the hill. The burst of colors can motivate anyone who needs an extra boost on a long ride.

Robin Cohen and Adriana D’Alessandro created The Sandy Rollman Ovarian Cancer Foundation as a tribute to D’Alessandro’s sister, Sandy Rollman, who passed away from advanced ovarian cancer at age 33. Painted in 2005, “Sandy's Dream” was the first wall painting work to raise cancer awareness in the United States and is located at Propperview Apartments. The mural was restored in 2015, ten years after it was first painted. 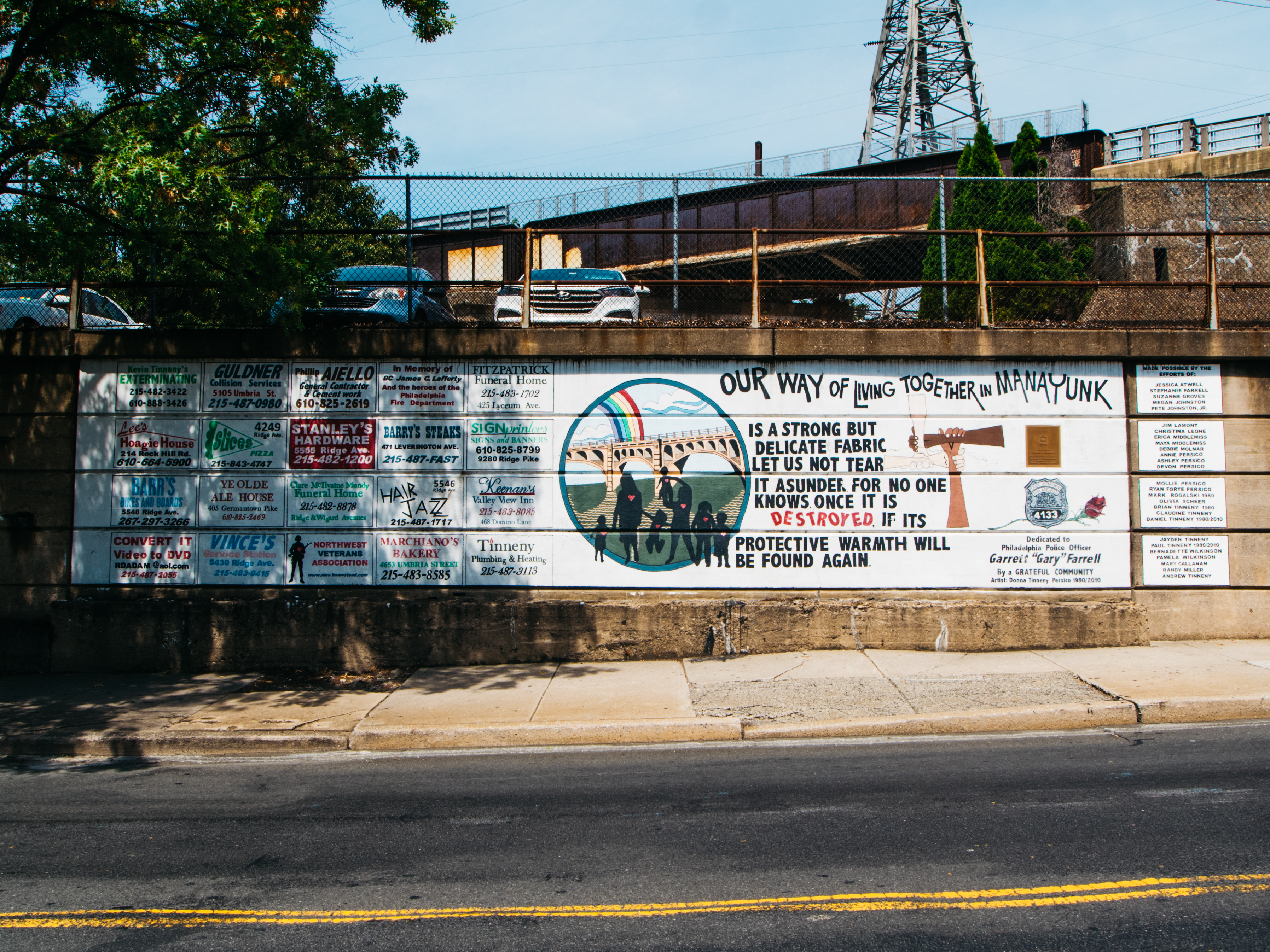 Located past the corner of Main and Green, this community-made mural celebrates the diversity of life that is found in Manayunk. This mural showcases local businesses and the residents who love the community. The mural is dedicated to the memory of police officer Garrett Farrell, who died in the line of duty protecting the citizens of Philadelphia. 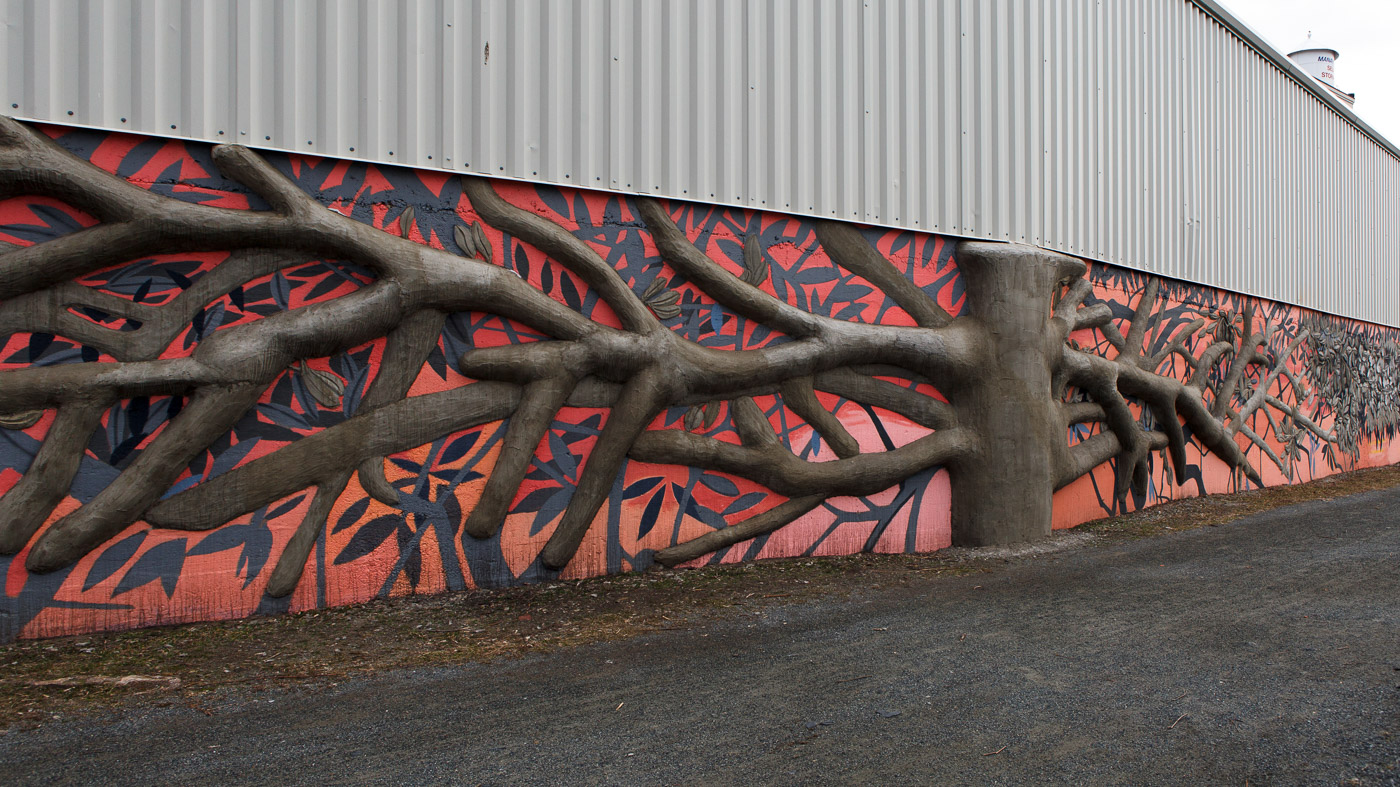 Find this work of art made by Santoleri on the northern end of the towpath. Completed in 2016, the mural depicts a concrete tree engulfing bright blue and gray flowers against a coral background. The “Concrete Tree” recognizes Manayunk's industrial heritage. Combining both man-made and natural beauty, the display is a nod to the force of nature, which has reclaimed the area in recent years. 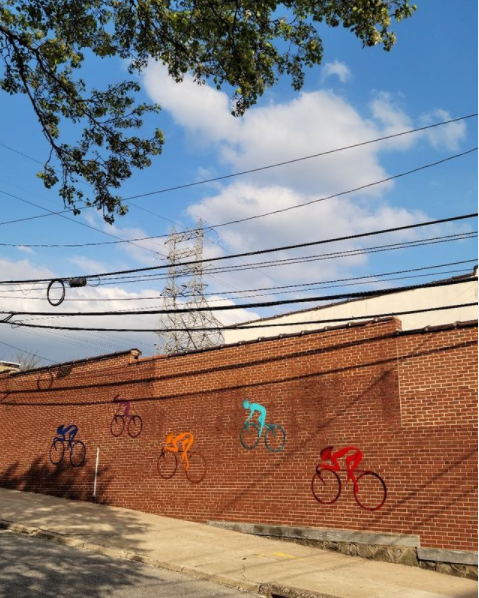 Made by Artesano Ironworks, a local small business, these aluminum bikes painted an array of colors are an homage to the cyclists who frequent the streets of Manayunk. Placed on the brick wall at GJ Littlewood in 2021, these bikes pop against the red background. This piece can be seen when strolling (or pedaling) down Shurs Lane.

The Manayunk Development Corporation creates seasonal displays located at Gay Street. The "Under the Rainbow" display is featured for Summer 2021 during pride month through the end of October for Manayunk's Annual Out and About. Other displays have included flower wrapped hoops for the Garden on Gay in Spring and snowflakes for the holiday season.

This art was made by Artpce, also known as Halimah Smith, a local graphic artist from Philadelphia. "The primary mission of Artpce is and always will be to uplift and celebrate Black people and Black culture," said artist Halimah Smith. 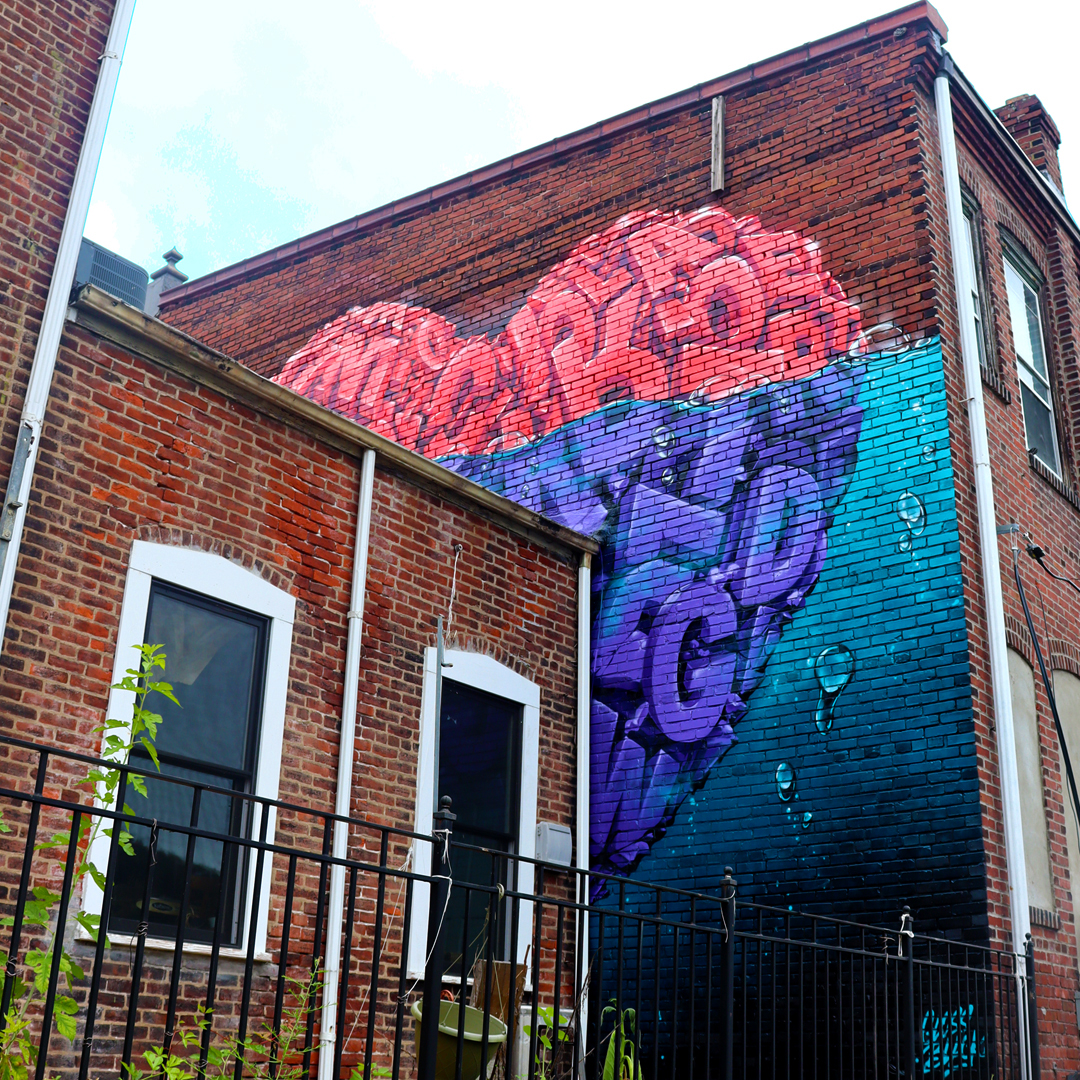 Look for this mural at the back of the Taqueria Amor along the towpath. "Amor Flota" shows a heart made of letters floating on the side of the building. This mural was painted in 2020. "Taqueria Amor’s new name comes with a new mural ‘El Amor Flota’," said artist Jimmy M. 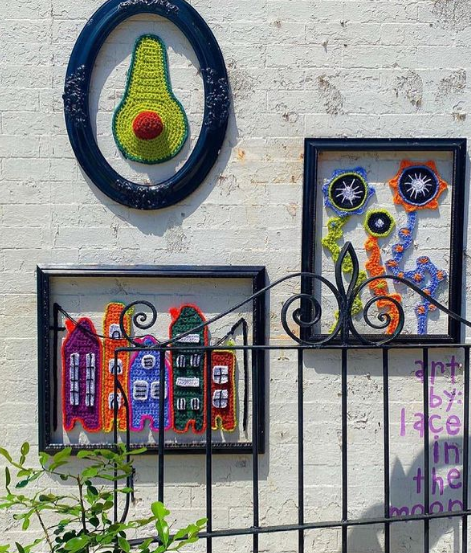 "Yarn Bomb"- Lace in the Moon

Located right outside of Chabaa Thai, at 4343 Main Street, this colorfully woven piece jumps right out at you as yous stroll down the street! Lace in the Moon created this piece during a live installation in May 2021.