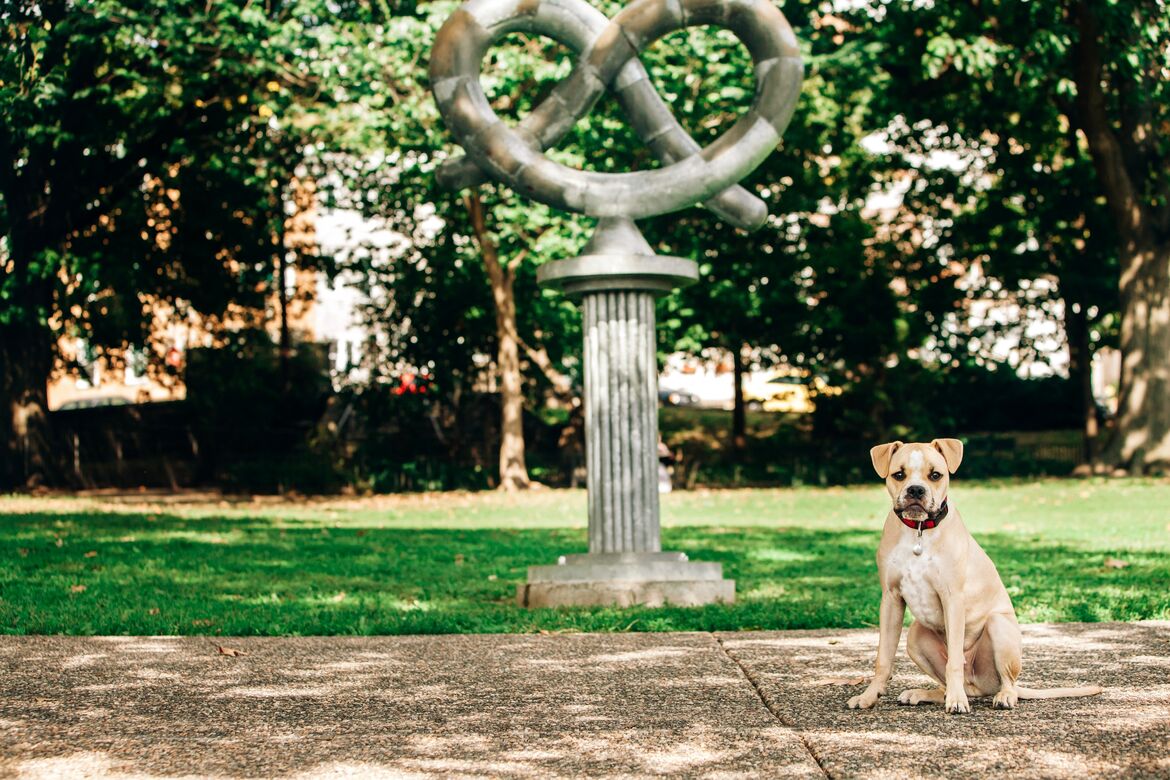 On any given day, Pretzel Park is buzzing. In the fall, you’ll find dogs and children in their designated play areas crunching leaves and clinging onto the last warm days of the year. In the winter, it’s a snowball fight between kids who have the day off from school. In the spring, you catch up with your neighbors taking in fresh air after a day at the office. And in the summer, that’s when it’s at its peak—families stopping by the farmers’ market for their weekly dose of fresh, local goods, friends gathering for an afternoon picnic or game of Frisbee, and live music that fills the air once night falls.

The park has all of the qualities of a neighborhood hub. It finds itself in a central location, nestled in the middle of Cresson Street, Cotton Street, Silverwood Street, and Rector Street. Even on the hottest days, the trees make it a cool and quiet area for those who need some time to relax. And, it has its fair share of family-friendly activities, like the occasional story time and the Halloween parade. But, the park as a whole has seen better days.

Pretzel Park went through its most recent renovations in the early 2000s under then Councilman Nutter’s watch with the help of the Pennsylvania Horticultural Society and a former state representative. New playground equipment was placed, a dog run was dug up and fenced in, and benches were installed. Kevin Smith, president of the Manayunk Neighborhood Council (MNC), was another key player who got involved with the community when he moved to Manayunk 20 years ago.

“Pretzel Park was pretty run down at the time,” Kevin said. “We met a few people who had done cleanups in past years and really, just as part of MNC, we put together a Pretzel Park group and just started doing cleanups and basic, simple maintenance in the park. That led to the renovations.”

And thus, the Friends of Pretzel Park was born. The organization is entirely made up of volunteers and is solely responsible for maintaining the park on a day-to-day basis. They also run all of the events, like the farmers’ market and summer concert series, and even fundraise when they find the time.

Some may say Kevin has a sidekick in his community efforts. Dave Bass moved from Germantown in 2008 and got involved a year later when he heard there were threats to shut down the post office.

Dave has been overseeing park operations since then. He often communicates with the Philadelphia Parks and Recreation Department, organizes events, and writes grants for the park with Councilman Curtis Jones’ office.

Flash forward to spring 2014 when Yenssy Goyins moved to the neighborhood, just before welcoming her first child. Yenssy and her husband didn’t frequent the park until their son got older. When they took a closer look at the playground equipment, they were surprised to say the least.

“I would put him on the swing and think, ‘Wow, these swings could really use some work,’” Yenssy recalled. “At the same time, I started meeting other moms and heard stories about children getting their foot stuck between the flooring—the rubber squares.”

What was once an innovative, safe play area has dwindled down to just a few staple pieces of a playground—a “shell of what it used to be,” according to Yenssy. Rumor has it, playground equipment often gets hauled away instead of repaired when a report is filed with the city. She was determined to have a nice playground for her son to play on as he got older and started to make phone calls to the parks and recreation department.

“I got a hold of this woman, Barbara McCabe,” Yenssy recalled. “Barbara had told me that it’s important to look at the park holistically. She said, ‘You really need to think about the old-timers who sit on the benches, and the dog owners, and the farmers’ market, even different vendors along the way, and how to get them involved.’”

Yenssy was eventually connected to Dave, who referred her to Councilman Jones’ office. He encouraged her to speak with the Community Design Collaborative (CDC) as the first step to renovating the park.

“He told me working with the CDC accelerates the project and makes it a priority. The work the city would normally take years to do would already be done,” she said.

In August 2015, Yenssy got good news. All 74 pages of Pretzel Park’s new plans included sketches and images of beautiful renovations that would make for the ultimate neighborhood hub. The vision of the playground included a natural play area, an imaginative play area, an embankment slide, and even a possible spray garden. The dog run would expand to include separate small dog and large dog areas, and boulders would be installed to retain terrain elevation at the bottom of the hill, which will solve the problem of the low wall along the sidewalk that many dog owners complain about. The park itself would receive new lighting, new fencing, a meditation garden, and an improved entryway, among many other features.

A year and a half later, all Kevin, Dave, Yenssy and the rest of MNC need are the funds to make their dream a reality—and an army of people to help them get it done.

“There was a point where there were about 30 people at a meeting,” Yenssy said. “There were a lot of people who said they would be involved but slowly it dwindled, and I knew that would happen.”

As any long-time Manayunk resident can tell you, the demographic of the neighborhood has changed in recent years. Young families are moving in and staying here—something that Dave is heavily relying on.

“We’re looking for people who aren’t looking for glamor in the job description,” he said. “Doing this stuff, it’s not glamorous. You have to connect with people and it’s a lot of work.”

“We have to have people. We need a volunteer wrangler,” Kevin echoed.

For now, the plan is to get more funds in place for bigger projects while knocking off smaller projects grant by grant, such as spreading mulch around the dog run and putting in new plants around the park. The Manayunk Development Corporation has decided to step in and make Pretzel Park the beneficiary of the Best of Manayunk cocktail party by donating a portion of proceeds from tickets sales to Friends of Pretzel Park.

“It helps with fundraising to show that you’re active and actually doing things,” Kevin said. “Getting to the point where we’re actually sending schedules on the program is where I’d like to be so we can put that in front of people and say, ‘This is happening!’”

“Parks and recreation has put a lot of work into the park over the years, and we appreciate that,” Dave added. “We also appreciate all of the support MDC has given us over the years. Not a lot of people know this, but they pay the electric, supply doggy bags, promote our farmers’ market, and so on.”

As for the future, Kevin, Dave, and Yenssy all agree the improvements to the park are great, but they would like to see more of the same—a bigger and better farmers’ market, more businesses and organizations utilizing the park for their own events, and of course, getting residents together at their new community hub.

“We want to encourage that as much as possible,” Kevin added. “The park is a resource—it’s not just us. As I say, ‘It’s always a good day in Pretzel Park.’”