The Rebirth of Vintage 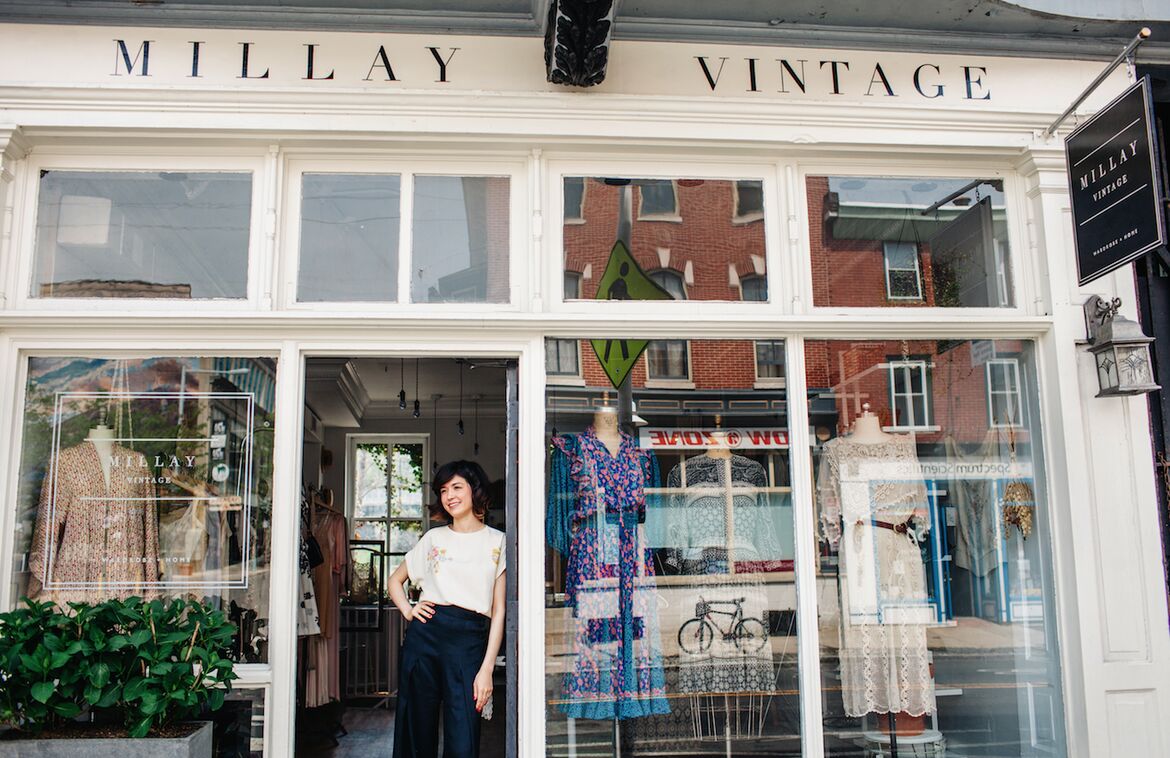 It was while Mary Spears was pursuing a master’s degree in American literature and feminist theory, that she began selling vintage clothing online from her Boston apartment. But what started as a side project to earn a little extra money, quickly turned into a passion as her online following began to grow.

“I started sharing what I was doing and people really connected with it,” Mary said. “When I started this all two years ago, there was the vintage niche, but it was vintage for people who loved vintage. I came on the scene and I was doing something different. I wanted to do vintage for everybody and make it accessible, relevant, and modern. I think the concept was fresh and exciting to people.”

Mary realized how much she enjoyed what she was doing and the positive responses she was getting from her new followers and buyers, who were always excited to see what she was going to post next. So, after more thought, she mustered the courage to let go of following her five year plan and leave her master’s degree behind to turn her hobby into a full-time business.

“I never thought I would quit anything, but quitting grad school was the best decision for me,” she said. “When following your passion, you just have to put your head down and work really hard when your gut is telling you to trust something, just trust yourself and jump.”

She began to source more clothing, learned everything there was to know about the fashion industry in each era of the 20th Century and reacquainted herself with her sewing machine. And when it came to naming her new shop, Mary looked to her master’s studies of American poet Edna St. Vincent Millay. “I really fell in love with her work as a romantic lyricist and feminist. She was so ambitious and beautiful and truly cared about herself sartorially in addition to intellectually,” Mary said. “It was a natural jump for me to use her as a prototype for the type of woman I shop for and the type of woman I build the shop around since she was so much a part of my life already.”

As she began sharing her new finds online and on her Instagram account, her online following took on a life of it’s own; her Instagram now boasts nearly 30,000 followers. While most businesses start with a brick and mortar and then turn to online marketing, Mary did just the opposite. “I was so grassroots. Since I dropped out of grad school, I really had to hustle to make it worthwhile,” Mary said. “I have so much to be grateful for. I wouldn’t have this shop if I didn’t have people supporting my online shop and following me on social media.”

Soon after, her once side-project started to outgrow her one-bedroom apartment. With the news of her husband Will’s acceptance to medical school at Drexel University College of Medicine, they packed up their Boston apartment and moved to East Falls and soon after, Mary opened a much needed studio space in Kensington.

While they enjoyed living in East Falls, they found themselves spending most of their time on Main Street in Manayunk and became friendly with many of the shop owners including Stacy, of Meadowsweet Mercantile. It was when Stacy decided to move her shop to Old City and needed a subletter as soon as possible, that having a storefront on Main Street was put on Mary’s radar.

While she was happy with her growing online business and current studio, Mary fell in love with the space and knew she had to make the move. In her words, “There’s something so magical here. It was a total impulse moment that I jumped in with only a week to prepare to open,” Mary said. “We opened the shop and moved to Manayunk and now I live about 30 steps away from my store which couldn’t be any more convenient.”

When you step into Millay Vintage’s brick and mortar home at 4390 Main Street, you’re immersed in a truly unique shopping experience and are surrounded by Mary’s simple yet stunning aesthetic. Her bright and open shop is a temporary home to hundreds of pieces that have each been hand-picked to go on a journey to eventually land on the rack. All of the pieces are hand picked by Mary from sources mostly in New England, Pennsylvania and New York, “but the specifics of that have to be kept a trade secret,” Mary laughed. 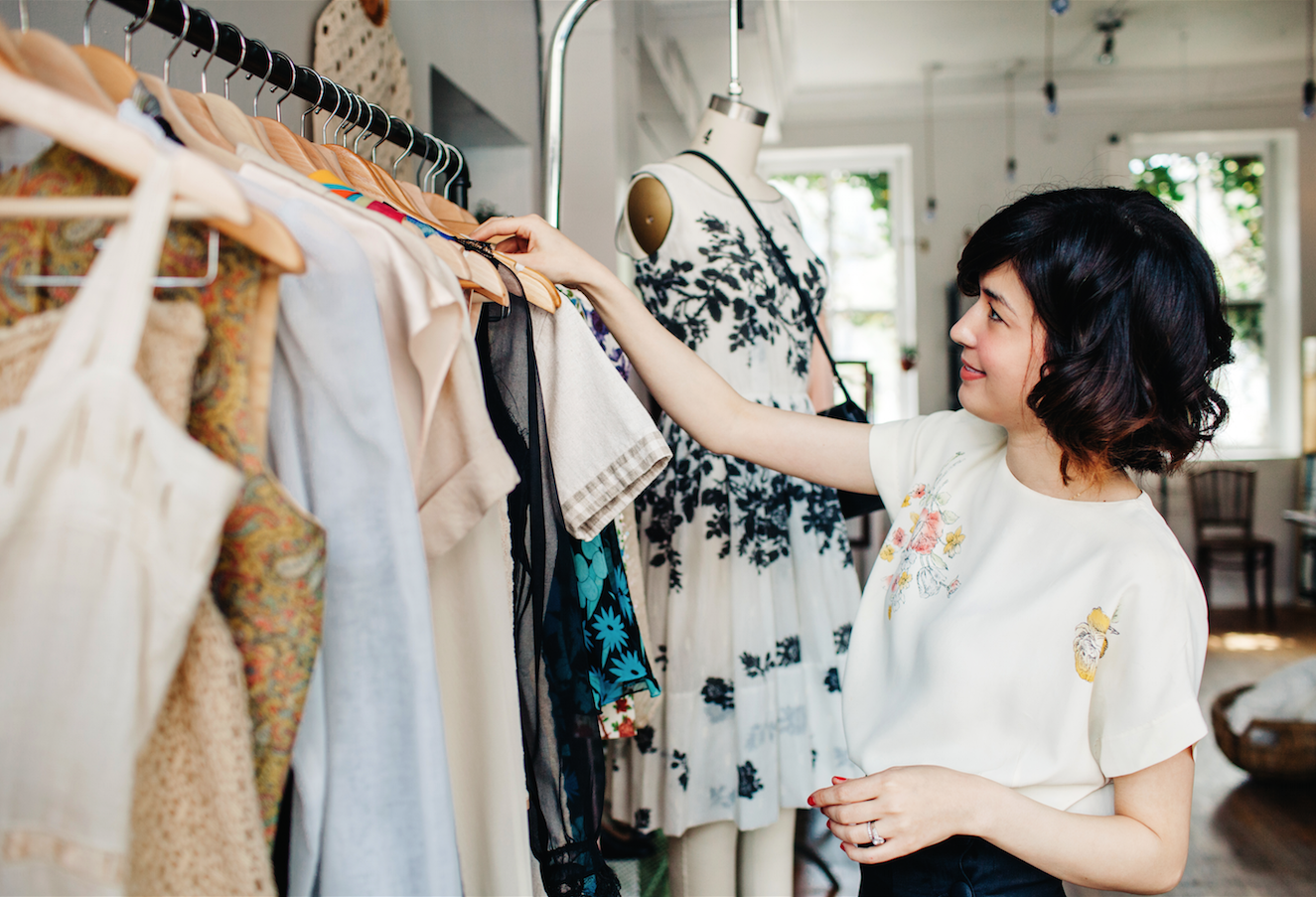 Mary wasn’t new to hand picking pieces though. Growing up, her single mother taught her how to be creative with limited resources and she began to appreciate vintage and recycled clothing at a young age. She would often pick up garments at yard sales and thrift stores and learned to make them into her own by altering and restyling them to work just for her.

To ensure that she is providing elevated vintage and luxury items that aren’t falling off the hanger, Mary looks for top of the line constructed pieces from designers she’s familiar with. Once she finds those, Mary spends hours researching the pieces to find out where it came from, what era it was built in and how she can repair it.

While it is now much easier for Mary to identify what era an item was constructed, it came with several years of practice. “There are a lot of standout parts of construction that are dead giveaways,” Mary said. “For example, if something has a zipper on the side versus a zipper on the back, it indicates if it’s pre-60’s or post-60’s. Pieces that are very couture-level and hand-sewn pre-date manufactured 1940’s clothing.” Another thing to look at is fabric, Mary said, if it’s rayon that’s a sign that it was introduced during the World War II era.

If it sounds like a lot of work, that’s because it is. “I probably sleep four hours a night,” Mary said. “For every pretty moment you see here, there are 250 un-pretty moments to get us here like driving over two hours at 4 a.m. to dig through someone else’s trash to find treasure. Every piece on a hanger has gone through me driving somewhere, finding it, bringing it home, washing it four or five times, figuring out how to press and iron it, and how to put it in a context where it makes sense in the modern world.”

It’s Mary job to bring everything back to life and every week is a rebirth of new things as she changes out inventory in her brick and mortar shop and adds new things to her online store. Every item that goes online has to be photographed, descriptions have to be written and then it gets promoted on social media, and Mary does all of that herself.

While it’s a lot of work, it’s all worth it for Mary when she sees magical moments happen in her store. “When someone finds the perfect thing for them, I get to watch them come alive,” Mary said. “I’ve sold a lot of wedding dresses to brides and it’s always really special to see them connect with an old piece at such an important moment in their life.”