Originally referred to as the town of Flat Rock, Manayunk received its iconic name at a town council meeting on May 4, 1824. The residents chose the name from the Lenape Indian word for the Schuylkill River “manaiung” which literally translates to “place to drink” in English.

Though European colonists had settled in the area as early as the 1700s, the town started to boom with the completion of the Manayunk Canal in 1823. The canal served as a vital link between the coal-rich regions above Reading, PA and Philadelphia’s thriving ports along the Delaware River. This led to the construction of numerous textile mills along what is now the Main Street commercial corridor, and eventually transformed the neighborhood into one of the most prominent manufacturing villages in the United States at that time — so much so that Manayunk became known as the “Manchester of America.”

Manayunk became a part of the City of Philadelphia in 1854 while still maintaining its own identity. Working-class immigrants of German, Irish, Italian, and Polish descent flocked to the neighborhood in search of work and housing. As a result, each of these groups founded their own Catholic churches along Manayunk’s hillside.

Throughout the 20th century, the neighborhood’s reputation as a manufacturing haven drastically changed as Manayunk’s revitalization efforts began. Vacant storefronts and mill buildings became the locations of new restaurants and retail stores. Today, Manayunk is home to a wide variety of options for dining, shopping, working out, and living! 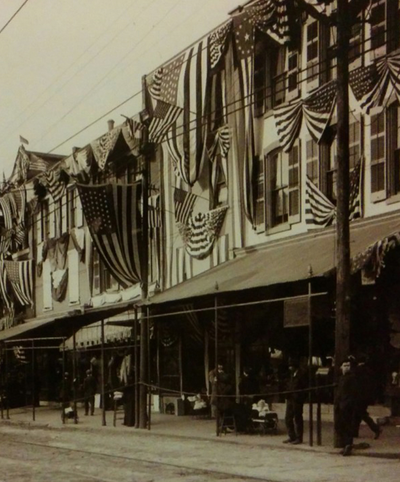 In 2015, the Manayunk Development Corporation (MDC) reached out the Philadelphia Department of Commerce to do a streetscape study. From the study came an extensive plan — from pedestrian lighting to crosswalks and bike corrals. Since the study, MDC has been seeking funds with the help of the Philadelphia Department of Commerce, state representatives, and other sources to implement some of the plans from the study.

Pedestrian Lighting
The addition of pedestrian lights will be one of the key elements that set the stage for new development and is important for guiding on-street cyclists to the Tow Path.

The pedestrian lights will be spaced approximately every 55 feet. Ideally, they will be staggered on each side of the street, however the exact locations will be determined by the Streets Department during the final design stages.

Crosswalks
Crosswalks are a vital safety feature for crossing a street, especially in locations where there is not a stop sign or traffic light, several of which can be found along Main Street. In the past, MDC painted special murals over several of the crosswalks. While these murals provided interest, they have not fared well over time, and they do not signalize a crosswalk. Furthermore, the Streets Department will not maintain them. They will be repainted. 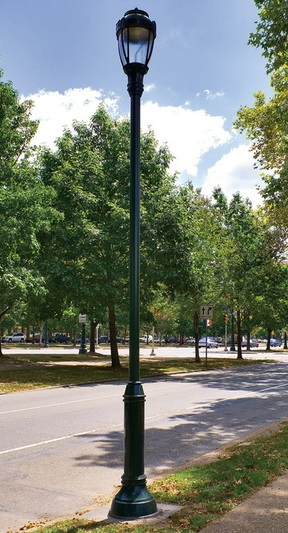 The Philadelphia Water Department (PWD) is in the process of connecting the Manayunk Canal back to the Schuylkill River with the mission to improve the water quality in the canal.

The Manayunk Canal was constructed as part of the larger Schuylkill River Navigation System to connect the Flat Rock and Fairmount Pools. The gates were manually operated and regular dredging was performed to maintain navigability. The Manayunk Canal ceased operations in the 1940s. With that came the removal of the lock gates and dredging was discontinued.

Today, the Manayunk Canal has no connection to the river. The canal is stagnant, which leads to algae blooms and the occasional fish kills. Sediment has accumulated upstream of the Feeder Structure further disconnecting the river and the canal, and the upstream area collects significant amounts of trash and debris.

PWD has looked for sustainable ways to reconnect the canal to the river. To be sustainable, the solution must provide for:

PWD has identified accessibility to be the biggest key to achieving sustainability. In order to do this, PWD will construct a new diversion facility upstream to the Feeder Structure to regulate flow and manage sediment. 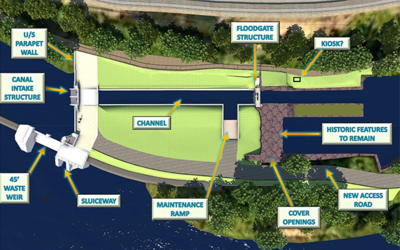 Recommended improvements to the roadway:

Short-term goal: Initial development at the "Movie Theater site" will include the addition of new retail buildings, landscaping, and open space areas. 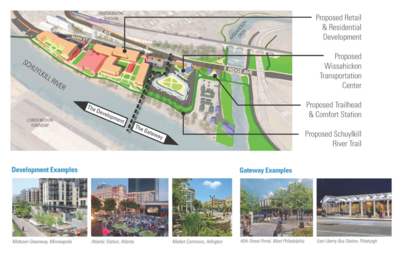